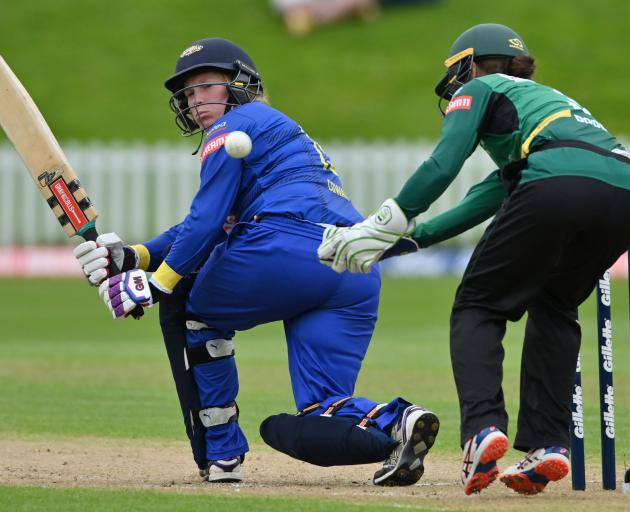 Sparks top scorer Millie Cowan flicks the ball past Hinds wicketkeeper Natalie Dodd during their match at the University Oval in Dunedin on Saturday. Photo: Gerard O'Brien
The Otago Sparks squeezed with the ball and survived the jitters with the bat to earn a Super Smash playoff spot.

They beat Central Districts by seven wickets at the University of Otago Oval on Saturday in what was a virtual knockout game.

The prize is an elimination final against Auckland on Thursday.

Otago still has a final round-robin game against Canterbury in Christchurch tomorrow to get through first.

But it is a dead rubber, and Sparks coach Nathan King suggested it was a good opportunity to experiment.

He might tinker with the batting line-up, but he might be reluctant to change the bowling too much.

The Sparks did a cracking job in the field to restrict the Hinds to a measly 104 for six.

The Sparks then slumped to 20 for three in their reply, but opener Millie Cowan carried her bat through an innings for the second consecutive time.

She made 55 from 51 deliveries and got tremendous support from Australian all-rounder Amanda-Jade Wellington, who struck 37 not out from 37 deliveries.

"When you only have to chase five an over, you just need a wee partnership to get going and that is what we got,’’ King said.

Hannah Darlington was marvellous with the ball. The Hinds actually made a decent start with the bat, but the 17-year-old Australian wrestled back momentum with a tight spell.

Her first two overs cost just two runs and she picked up the key wicket of Emily Cunningham.

When she returned later in the game she snagged two more wickets to finish with three for 12.

Emma Black had a good day at the bowling crease as well, with two for 24.

It was a really disciplined bowling effort by the Sparks.

They got through the 20 overs without conceding a single wide.

Hinds opener Jess Watkin did fire a couple of early shots. She clouted the last two balls of the opening over for four and six.

But the 21-year-old right-hander’s boundary options looked limited and she eventually holed out for 18.

Darlington’s arrival at the crease saw the run-rate take a dive. The pressure was starting to mount and the talented Natalie Dodd made a mistake on 11.

The right-hander shovelled the ball out towards Suzie Bates at mid on. Bates thrust herself forward in a desperate dive and it stuck – one of three catches she claimed.

The innings unravelled a little more when Anlo van Deventer swung a catch to Hayley Jensen at deep mid wicket for 15.

Otago's chase got off to a poor start. Bates inexplicably danced down the wicket and looked to loft a delivery from Watkin down the ground.

She sliced it and the catch ballooned to van Deventer at mid off.

More calamity was pending. Katey Martin was run out trying to scamper through for a quick single.

Then Jensen drove a return catch to Watkin.

Central had clawed its way back into the game, but the good news for Otago was it was not chasing a big total, so still had time to build a match-winning partnership.

And that is exactly what Cowan and Wellington did.