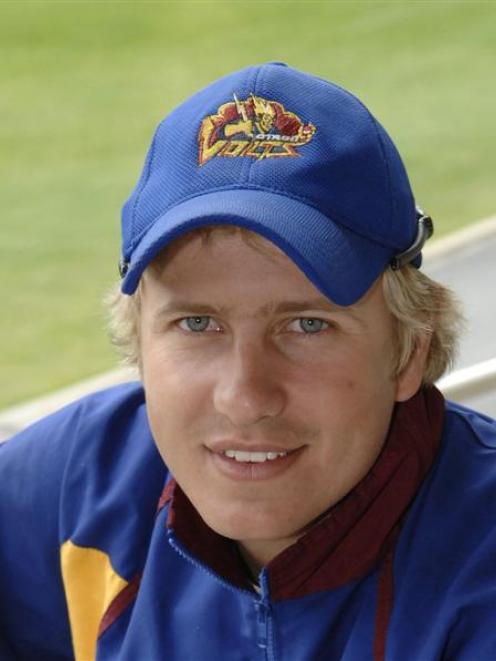 Neil Wagner has been outstanding for Otago all summer and underlined his class with a superb opening spell yesterday to help his side sweep aside Canterbury and book a date with Northern Districts in the State Shield final in Hamilton on Saturday.

The South African-born left-armer went into the semifinal as the competition's second leading wicket-taker with 20 wickets at an average of 18.10.

But he now occupies top spot after ripping through the Canterbury top order with three for 11 from seven overs.

It took just three deliveries to claim his first victim.

Pinch-hitter Iain Robertson dragged a delivery on to his stumps after trying to force it through the off side.

Wagner's old Transvaal teammate and Canterbury skipper Kruger van Wyk attempted to throw the bowler off his rhythm and walked down the track to a short delivery, succeeding only in nicking a pull shot through to the keeper.

Former New Zealand opener Michael Papps was the next to go when he was trapped in front by a quick, full delivery.

At 14 for three, Canterbury's innings was in ruins and the home side was never able to claw its way back into the match, thanks to a disciplined bowling performance from the visitors.

As well as Otago bowled, Canterbury will be ruing a woeful performance in which it was dismissed for a pitiful 86 on a flat but slow pitch at the Village Green.

Shane Bond sent some tremors through the Otago camp and gave a small crowd of about 500 something to cheer about when he removed opener Shaun Haig with his trademark inswinging yorker and bowled left-hander Greg Todd the next ball.

"This is what you play for," Wagner said.

"For us to make it to the final in my first season is just great and a massive privilege. Hopefully we take this form through and win the final."There were no demons in the wicket, Wagner said.

"It was pretty flat and slow and I just think we bowled really well."

Dimitri Mascarenhas bowled in tandem with Wagner and kept it tight from his end. The classy all-rounder bowled 10 overs on the trot and finished with figures of one for 16.

Warren McSkimming replaced Wagner at the crease and kept the pressure on.

He picked up his 100th one-day wicket when he nicked Ryan Burson out and took three for 13 from his eight overs.

Off-spinner Nathan McCullum was not letting up and claimed two for 23 from nine.

"We didn't allow them to play and from a coach's point of view, that is all you can ask of your team," Otago coach Mike Hesson said.

"When they did score boundaries they had to take risks and that is a sign of a well-disciplined performance.

"We were clinical and once we picked up a couple [of wickets] early, they went into their shell."Northern Districts has had the better of Otago this summer, winning both one-day matches.

Northern beat Otago by nine wickets in Alexandra in December but the sides had a much tighter encounter at Cobham Oval in Whangarei.

That game went down to the last over, with Northern winning by three wickets.