Cricket: Lees and Otago champions both 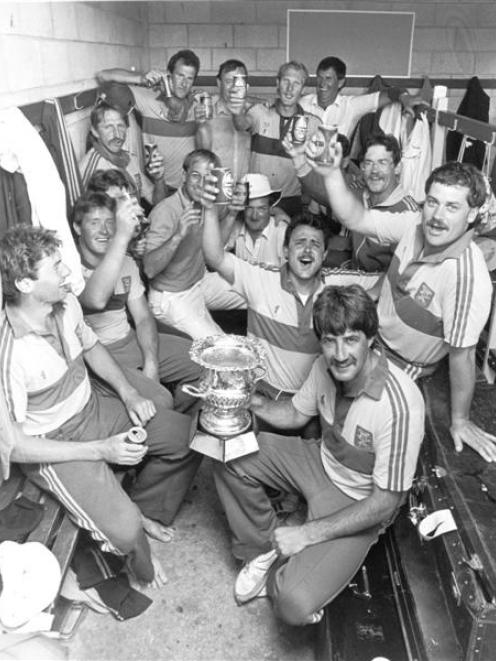 Warren Lees (holding trophy) and the Otago team celebrate winning the Shell Cup.
It could not have been a more fitting farewell for Warren Lees, Otago's most successful cricket captain, if he himself had written the script.

Slideshow: Remember when . . . Lees and Otago excelled at cricket

The summer of 1987-88 was to be his swansong, though he kept that to himself and did not announce his retirement until after the season.

He was keen to bow out on a high, but even he could not have envisaged the season ahead as Otago won the double of the Shell Cup and the Shell Trophy.

There were no finals back then.

The team with the most points at the end of the round robin was declared the champion.

The first leg was achieved under a blazing sun in temperatures of more than 30deg at Molyneux Park, Alexandra, on January 3 when Otago beat the second-placed side, Northern Districts, by two wickets with one delivery to spare in an enthralling finish.

There was almost a test rugby-type atmosphere at the ground as the well-lubricated crowd of 4500 (which paid $25,391) cheered and chanted as Otago clawed back off the canvas to gain an improbable win.

ND won the toss and, as Graeme Hick settled in, it seemed poised for a big total.

Hick, who was to play 65 tests and 120 one-day internationals for England and who scored 136 centuries in his first-class career, was the trump card.

He comfortably accumulated 18 before he made room to cut Stephen Boock, was deceived by the arm ball, and his middle stump sagged back.

That was the breakthrough Otago needed.

Grant Bradburn, Lindsay Crocker, Bryan Young and David White batted usefully but ND was all out in the 49th over for 183.

But, when the sixth Otago wicket fell at 66, all the good work had been undone and the crowd, dozing in the heat, fell silent.

Lees, who must have been sick in the stomach at the capitulation, hit two big sixes soon after he came in and, in the space of minutes, the complexion of the game changed.

The Otago innings gained some momentum and the crowd regained its voice.

Lees and the unflappable Derek Walker added 55 runs for the seventh wicket and, when Lees was dismissed, Walker and English professional Neil Mallender added 51 for the eighth.

It went down to the wire.

Otago needed 11 from the last over bowled by Hick, with Mallender and John Wilson, uncle of Jeff, at the crease.

Three runs were needed from two balls and there was an interminable delay as ND pondered its field placings.

Hick bowled the fifth ball on a perfect length but Wilson had his eye on the gap between long-on and long-off and there were jubilant scenes as the ball soared straight and true, first bounce into the sightscreen.

It was an emotional Lees who spoke after the match.

"A day like this is something to savour," he said.

"We hear so much about the falling population, the problems with the economy. It's nice to be able to show the rest of New Zealand we can still do it down here.

"The crowd got in behind us. I think they had given us away. I heard them yelling `The old man's going to do it' [a reference to his belligerent innings] and it gave us a lift."

The second half of the double was completed against the odds and in the most bizarre of circumstances.

Otago began the last round against Wellington at the Basin Reserve needing an outright win and maximum points to have a chance of winning the Shell Trophy.

It did the hard part, beating Wellington by 146 runs.

The Southland farmer and off-spinner, John Lindsay, took 10 wickets and Boock seven, Richard Hoskin had a fine double of 61 and 105, and Lees scored an unbeaten 68 in his last first-class match.

Otago thus finished top equal with Auckland on 52 points and the winner was decided by points differential.

Auckland immediately claimed the superior points differential - there was no sophisticated computer system in those days - but I and others who had kept records were convinced Otago had the better differential.

I was reporting the test between New Zealand and England in Christchurch at the time and approached members of the New Zealand Cricket Council at the weekend with my statistics.

Others did the same.

The Auckland officials' calculations had been incorrect.

There was a hurried re-checking of the official scorebooks and finally, on Monday morning, Otago was declared the winner.

It was a worthy winner, too.

The Otago players were notified of their victory and assembled at the Beach Hotel to start the celebrations but the Shell Trophy did not arrive in Dunedin from Auckland until a week later.

It had been a season to remember and, for Lees, an unforgettable end to a distinguished career