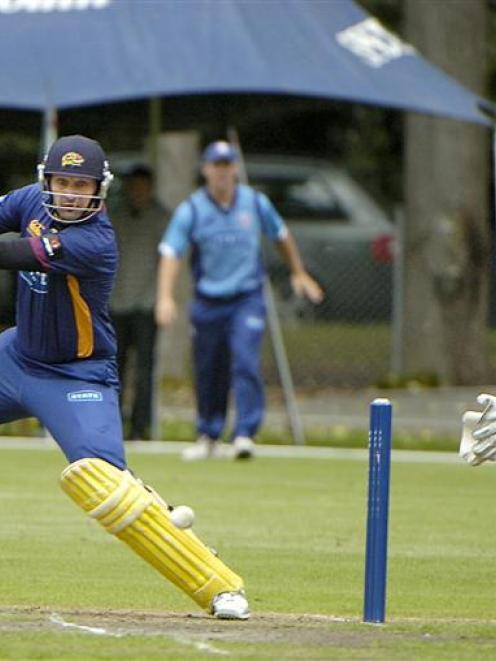 With six overs to go, Otago needed 36 runs and, with six wickets in hand, seemed poised to post its fourth victory in as many matches.

Chasing 143 to win in front of 450 spectators, Otago was in control but hit the doldrums, scoring just 13 runs between the 15th and 18th over.

Needing 23 off the last two overs, Ian Butler and Warren McSkimming struggled to find the boundary.

Butler smashed a massive six off the last ball on to the roof of the Otago Daily Times grandstand, but it was too little, too late, with Otago losing by just three runs.

Left arm spinner Roneel Hira was the hero for the visitors, picking up three for 21 from a match-winning four over spell.

He got the key wicket of Greg Todd when the left-hander tried to heave a delivery over midwicket, missed and was bowled.

Todd's dismissal was untimely for Otago.

He had anchored the innings with 39 off 35 balls and helped put his side in a solid position, despite both openers Aaron Redmond and Hamish Rutherford going relatively cheaply.

Otago coach Mike Hesson acknowledged it was a key moment in the match but said Todd was just one of several batsmen who got starts and did not go on.

"We had a number of guys get starts and . . . once you've got that momentum you need to go on and win games.

''There were several players who could have done that and no-one did.

Auckland got off to a promising start through Richard Jones and Colin de Grandhomme.

Grandhomme dispatched Neil Wagner for a four and a six to help plunder 12 in the first over of the match.

But McSkimming answered back with a tidy four over spell.

He removed Jones and then bowled the danger man, Scott Styris, for six, finishing with two for 14.

Auckland limped along losing wickets at regular intervals but a 52-run stand between Rob Nicol (26 not out) and Hira (28) helped their side post a defendable total on a slow pitch.

Otago's reply seemed hesitant compared with the three 200-run plus totals it had put on the board batting first earlier in the tournament.

The usually aggressive Hamish Rutherford seemed subdued in his short innings of 11, and Nathan McCullum looked in good touch but he hit a soft catch straight to Styris at short cover.

Dimitri Mascarenhas could not find his timing and perished for 14 from 17 balls, with Styris bagging his third catch.

The win means Auckland joins Otago at the top of the table with three wins from four matches.

Otago will not have much time to dwell on the missed opportunity as it plays Northern Districts at the Oval tomorrow.

The match starts at the earlier time of 2pm.

Green Island stalwart Dion Lobb will have a total of 200 games for the club when it plays Kaikorai at Sunnyvale today.

The medium-pacer will become the fourth "Swamp Rat" to reach the mark.

Lobb has taken 339 wickets and is the club's second leading wicket-taker.

He has taken 10 five-wicket bags and has a best of seven for 30.

Lobb has also scored more than 2000 runs, including six half-centuries, and has taken 79 catches.

He made one first-class appearance for Otago in 2006-07 and took one for 37 and scored four runs.

Simpson will be playing his 100th game for the club.