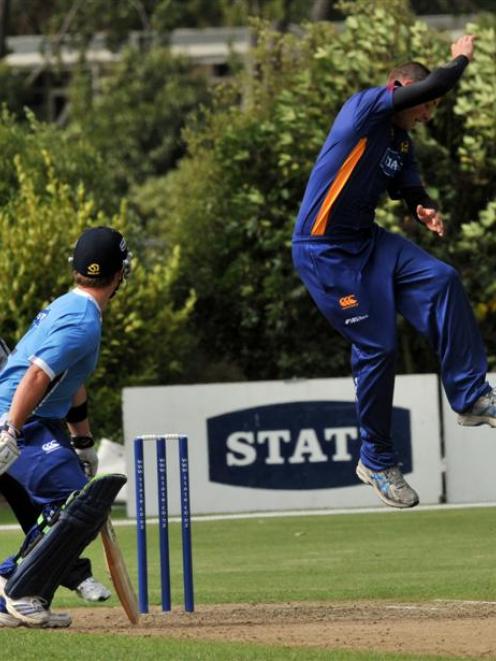 Otago Volts Mark Craig attempts a caught and bowled as Auckland Aces Steven Croft ducks in the 20/twenty State cricket match at the University Oval in Dunedin tonight. Photo by Ross Setford/NZPA
Auckland lowered Otago's colours in Dunedin tonight to join them atop the standings at the halfway stage of the Twenty20 cricket championship.

Auckland fought back in the last five overs after it appeared their 142 for seven wouldn't be enough at University Oval, beating the previously-unbeaten southerners by eight runs.

It leaves both teams on three wins from four and everything to play for leading up to the final on March 1.

Needing 16 off the last over bowled by Chris Martin, the southerners could manage only seven, their 134 for six a disappointing return after cruising through the first three-quarters of the chase.

The trouble started when top-scorer Greg Todd was bowled by Roneel Hira for 39 in the 16th over.

The remaining batsmen struggled to maintain the required run rate, which had been just a run-a-ball with 10 overs remaining.

Left-arm spinner Hira was the game's standout figure, taking three for 21 and top-scroing for the visitors with 28 off 20 balls.

He finished the Auckland innings in a lively fashion with Rob Nicol, who was unbeaten on 26 off 17. Both hit two sixes.

Unfashionable Otago seamer McSkimming kept the visitors in check with miserly figures of two for 14 off four overs, in the process moving level with Northern District's Joseph Yovich and Wellington's Luke Woodcock atop the competition's wicket-taking list with nine scalps.

Twenty20 cricket standings after the completion of fourth round matches today:-