Cricket: Runs in family for Hamish 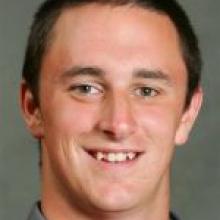 The son of former New Zealand and Otago cricketer Ken Rutherford, Hamish has been in good nick for Green Island in the senior competition scoring 119, 35 and 49 in three innings.

He has also been fairly consistent in the Districts Series, scoring 49, 13 and 117 in Invercargill yesterday.

His 117 came off 128 balls and included six fours and four sixes. He shared in 141-run opening stand with Ant Harris (58). Jordan Sheed remained undefeated on 61 to help guide Dunedin Metro to 278 for three.

Pelichet Bay's reply was weak with a capital W. Chasing a formidable total, the top six scored just 27 runs, and Shaun Haig made 21 of those. Along with Nick Beard (13), Haig was the only other batsman to notch double figures for the Bay.

In the other match, Southland got up to beat Otago Country by one wicket in a low-scoring match dominated by the bowlers.

Otago Country lost five wickets with the score anchored on 68, but a 102-run partnership for the ninth wicket between Will Somerville (52 not out) and Warren McSkimming (58) helped Country reach 187.

Southland turned in a commanding position but soon found itself facing defeat at 109 for seven. Hamish Skelt and Brett Freeman combined for a 48-run partnership for the eighth wicket to keep their side in the contest, and the last pair of Mat Harvie (15 not out) and Mark Beer (5 not out) held their nerve.

Country's wickets were shared around but McSkimming was the pick of the bowlers with two for 14 from six overs and Somerville bowled tightly with two for 24 from 10 overs.