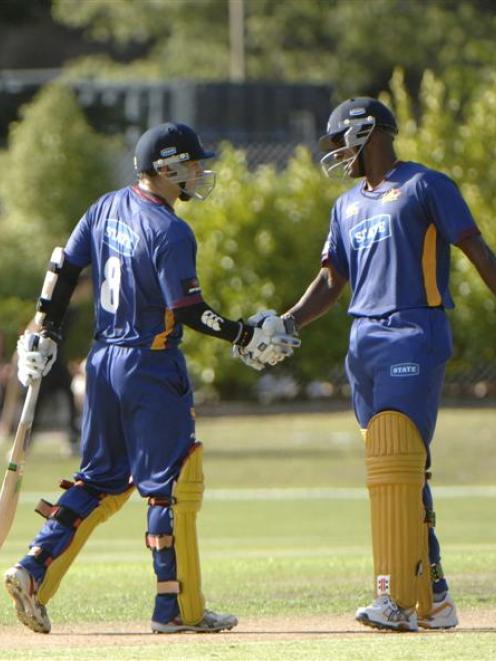 Nathan McCullum (left) is congratulated by Dimitri Mascarenhas after reaching his 50 at the Twenty/Twenty cricket match Otago vs Canterbury at the University Oval. Photo by Linda Robertson.
Otago all-rounders Nathan McCullum and Dimitri Mascarenhas redeemed themselves with a stunning unbroken 140-run stand to help their side beat Canterbury by 30 runs in a twenty/20 match in Dunedin yesterday.

McCullum entertained a 900-strong crowd at the University Oval with a special knock.

The punishing right-hander took the aerial route and bludgeoned seven sixes and three fours in an undefeated innings of 76 from just 42 deliveries.

The Otago captain mixed power hitting with some inventive reverse sweeps and lap shots as the depleted Canterbury attack wilted under the onslaught.

Mascarenhas barely got out of first gear but still managed to smash 57 off 35 deliveries as he helped guide Otago to 222 for three.

South African-born Johann Myburgh did his best to keep Canterbury in the match with an impressive innings of 73 from 42 balls.

But the visiting side always trailed the required run rate and never got into a position to mount a serious assault at the target, reaching 192 for six.

For McCullum and Mascarenhas it was redemption of sorts. The pair struggled to get on top of Northern Districts spinners Bruce Martin and Kane Williamson in the one-day final in Hamilton last week.

Mascarenhas' ponderous innings of 17 from 70 balls, in particular, attracted criticism. But there was no repeat yesterday, with the pair taking apart a weakened Canterbury attack.

"Both those players were initially in the squad and we did not know about Bondy until [yesterday] morning and Burson was ruled out [on Tuesday night]," Canterbury coach Bob Carter said.

"But when you give up 222 in a twenty-over match then obviously you haven't bowled very well."

Canterbury offered Otago the entire gambit, from waist-high full tosses to half-trackers, and McCullum and Mascarenhas were in no mood to dead-bat the ball back down the pitch.

Canterbury was also without the services of veteran all-rounder Chris Harris, who has been forced to stand down until New Zealand Cricket is clear whether his presence would jeopardise the chance to play in the lucrative Indian Champions League later this year.

Hamish Rutherford set a good platform for Otago with an aggressive innings of 41 from 23 balls.

Aaron Redmond never looked comfortable during his stay, after appearing to strain his back. But he whacked a six and four boundaries in a 60-run opening stand.

Iain Robertson got Canterbury's chase off to a flyer. He drove the first ball he faced for four and then dispatched another backward of point for six, taking 13 off Neil Wagner's first over.

Michael Papps failed to get going and spooned a catch back to the bowler, Warren McSkimming, and the in-form Shanan Stewart picked out McSkimming at long on to leave Canterbury 47 for two.

Myburgh and Robertson took up the daunting challenge but when the latter was out for 32, lbw to debutant Mark Craig, any momentum the innings was gaining waned.

Myburgh continued to blast boundaries, whacking three sixes and eight fours, and the skipper, Kruger van Wyk, chipped in with a hard-hit 31 off 16 to narrow the deficit. But it was too little, too late.

Ian Butler was the pick of the Otago bowlers, taking two for 31 from his four overs.

•Northern Districts' joy at winning the State Shield was short-lived after they crashed to a five-wicket loss to Auckland in their opening-round twenty/20 match last night, NZPA reports.

Northern's 149 for eight was overhauled by the host team with eight balls remaining at Eden Park Outer Oval, with Auckland never stressed in reaching 150 for five.

Wellington took the points when rain forced an early end to its match against Central Districts in Napier last night.

It was declared the winner by 20 runs under the Duckworth-Lewis system, with the home side 63 for four after 10 overs chasing a target of 161 at McLean Park.