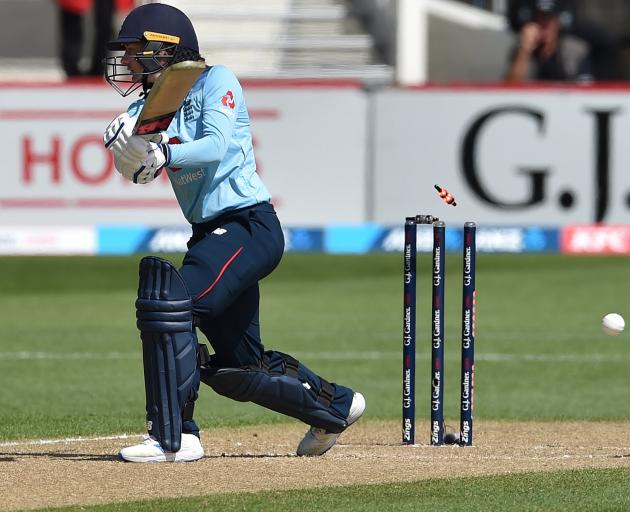 England opener Danni Wyatt is bowled by White Ferns seamer Jess Kerr in a one-day international at the University of Otago Oval yesterday. PHOTO: GREGOR RICHARDSON
England all-rounder Nat Sciver believes her side has a mental edge over the White Ferns.

Sciver steered the world champion to a comfortable seven-wicket win in Dunedin yesterday.

England has an unassailable 2-0 lead in the three game-series which will wrap up in Dunedin tomorrow.

The experienced 28-year-old combined with Katherine Brunt to wipe out the home side’s top order and then whacked a fluent 63 to help condemn the White Ferns to an 11th consecutive one-day loss.

"I think it shows — we’ve managed to bowl them out twice," Sciver responded when asked if her side had a mental advantage.

"Wickets are a real key goal for us.

"I think the way we have been bowling we’d get a few wickets from other sides as well.

"But we know that is not their best performance, especially with the bat. And we know what their players are capable of but unfortunately, at this minute, we seem to be one step ahead a little bit."

The White Ferns top five all made a quick trip to the middle and back.

Brooke Halliday added some starch with a fine knock of 60 in her second ODI appearance, and Hannah Rowe (29 not out) and Jess Kerr (28) got the White Ferns through to 192.

But England opener Tammy Beaumont (72 not out) and Amy Jones (46 not out) clinched the win with more than 12 overs remaining.

The White Ferns lost the game in the opening hour, crashing to 34 for five.

Otago’s Hayley Jensen went first. She scored a half century in the opening game of the series but nicked out for nought in the first over.

Brunt got the ball to bounce a little more and was celebrating again awfully quickly.

Natalie Dodd’s feet went nowhere and she managed to chop a delivery back on to the stumps.

But the prized wicket of Sophie Devine went to Sciver.

Devine popped a leading edge to mid-on. It was an uncharacteristically timid shot from the White Ferns captain.

It was the kind of delivery she may have launched into during the Super Smash.

Melie Kerr was bowled by a peach from Sciver which nipped back a touch.

And the top-five set was complete when Amy Satterthwaite walked after feathering an edge on 13. There was barely an appeal but she acted honourably.

Otago veteran Katey Martin had waited her entire career to play an international in her home city and was faced with an enormous repair job ahead.

She looked determined and she combined with Halliday to add 42 for the sixth wicket.

But the partnership needed to go on and Martin will be dirty at the mode of her dismissal.

She got a nice plump full toss but duffed it and was caught at deep square leg for 17.

Sciver finished with three for 26 and Brunt grabbed two for 34 to add to her career tally of 153.

The visitors slumped to 12 for two early in their reply.

Jess Kerr got a ball to swing in and opener Danni Wyatt succeeded only in steering an inside edge on to her stumps.

Heather Knight was run out for eight in the third over.

But Sciver got herself set and she combined with Beaumont in a 103-run stand to set up an easy win.

There was a small crowd of several hundred people present.