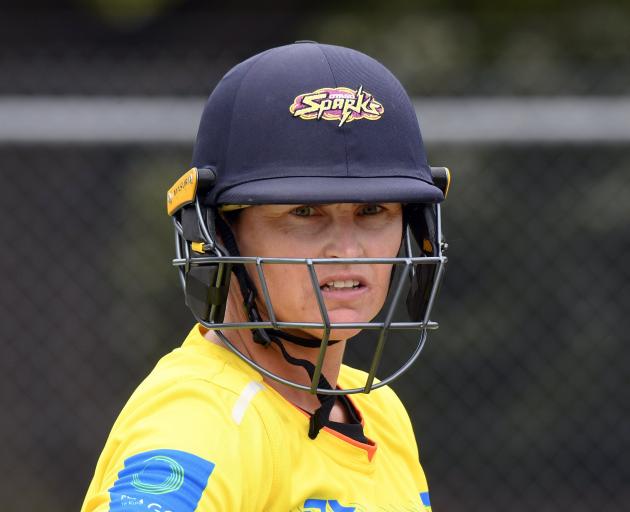 Veteran Otago wicketkeeper- batswoman Katey Martin is all concentration during a net session earlier this week. PHOTO: STEPHEN JAQUIERY
Katey Martin has escaped Chateau on the Park to finally get back out on the park.

The international stayed on in Australia following the White Ferns tour in September-October.

Initially there was talk she might play in the Women’s Big Bash League, but she ended up behind the microphone doing some commentary work instead.

Upon returning to New Zealand she went into managed isolation at Chateau on the Park in Christchurch, which is where the Pakistan squad was being housed during its stretch in isolation.

Her 14 day confinement blew out to 17 days after members of the Pakistan squad tested positive for Covid-19.

But the 35-year-old got out early last week and played club cricket in Christchurch during the weekend.

Martin was able to hammer out some of the rust and hammer the ball as well. She managed to snap her bat.

"Bit too much bottom hand," she joked.

That hitting power will be received warmly by the Sparks. Martin rejoins the squad in time for its back-to-back games against Central Districts in Dunedin this weekend.

The Sparks remain winless. The team suffered heavy losses to Canterbury on the opening weekend and lost both games against Auckland in Invercargill earlier this month.

Martin, who before last weekend had not played since October 6, said the ball was coming out of the middle nicely during a training session on Thursday.

"I’m feeling pretty good and ready to play. I’m excited to get back amongst the group and the girls have being going all right.

"Caitlin Blakely has been batting really well and Polly Inglis is back. We are without Suzie Bates, so that is a bit of a shame."

Bates had surgery on her shoulder in Christchurch this week and faces a lengthy stint rehabilitating.

"It all went really well. But by all accounts the next couple of weeks it is going to be a bit painful.

"But she has just been really hanging out to get the surgery done and start her recovery."

The third member of the Sparks’ White Ferns trio, Hayley Jensen, is in managed isolation in Auckland and gets out on Christmas day.

Martin was upbeat about the Sparks’ prospects for the remainder of the one-day competition.

"We’ve played Canterbury and Auckland so far and they are obviously tough teams to play against.

"But I’ve been really impressed with the girls by the positive nature that they are playing with when they bat. That may not have come across on the scoreboard as much as they would have liked, but we’ve got a really young group."

She has also nabbed 103 catches and 68 stumpings since making her debut in January 2002.

She brings a formidable amount of experience to the squad and is a proven match-winner.

"Hopefully me coming back in will help with a bit more experience through the middle and we can put on some good totals."