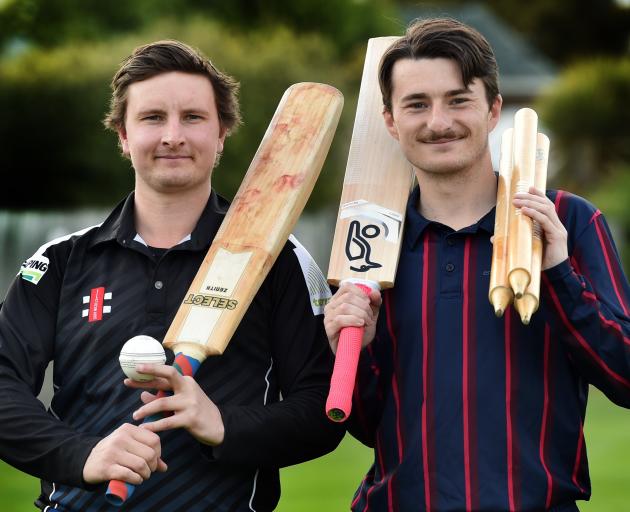 Jeremy Smith (left), of Kaikorai, and Kurt Johnston, of Carisbrook Dunedin, are looking forward to the new cricket season and the merger of the clubs’ senior and second-grade teams which was confirmed on Tuesday night. PHOTO: PETER MCINTOSH
Kaikorai and Carisbrook-Dunedin will merge as expected.

The clubs voted unanimously on Tuesday night to combine their senior and second-grade teams.

Kaikorai senior club president Geoff Bates described the decision as a "win-win" for both clubs.

He also indicated a full club merger was part of the "medium-term vision".

But for now the clubs are concentrating on making it work for the two teams.

There are plenty of details still to work through but essentially it had become a battle for both clubs to put a quality senior side together once the representative players and students were out of the mix.

By joining forces that will no longer be a problem. In fact, there should be more competition for places.

The move is a pragmatic rather than a sentimental step and there will be some significant challenges combining teams from different parts of the city.

"We’ve had feedback from life members and from some of our stalwarts on a club merger and that is going to be difficult," Bates said.

"Our biggest issue is the geographic distance between the two communities that we serve. It is something we’ll work through."

"The full club merger will take a little more water under the bridge to try and get resolution and acceptance."

Bates felt it was a proactive move for Kaikorai to get involved with a merger.

He is strongly of the opinion the population in Dunedin does not support seven senior teams and he has concerns about whether six is perhaps too many as well.

The senior grade has had seven teams for the past two seasons after University-Grange rejoined the tournament following a four-year absence. It has struggled since returning and was arguably the club in greatest need of merging.

Otago Cricket Association (OCA) general manager of community cricket Andrew Petrie said the OCA saw a need to reduce the competition to six teams and it had encouraged University-Grange to consider merging.

But having put in so much work to get back in the grade, University-Grange was reluctant to lose its identity.

"There was some encouragement for a few teams to consider their future," Petrie said.

"Long-term we want a sustainable competition and that means not just strong teams on the park but strong clubs as well."

Petrie said with Kaikorai and Carisbrook-Dunedin agreeing to join forces, the OCA could now work on a six-team structure for the 2020-21 season.

The senior grade will change names and will be called the premier grade. And the OCA will be putting in place some "on and off-field requirements for clubs" to ensure the competition’s sustainability.