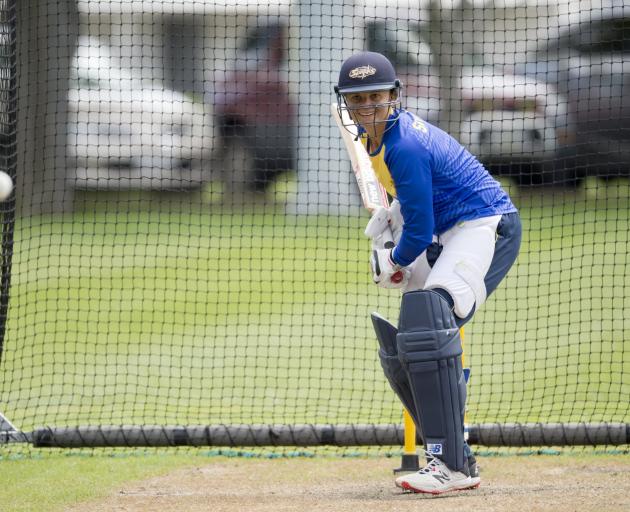 The veteran opener made an undefeated 76 from 59 deliveries to drag her team through to 154 for five.

Otago’s tally proved a steep target on a slow pitch and the home side limped to 93 for eight — a 61-run loss.

The Sparks are now two from two and Bates has scored back-to-back half centuries.

She was the star but the effort with the ball was very decent as well.

Strike bowler Emma Black got prodigious swing. She bowled opener Kate Anderson for seven and finished with two for 15.

Spinners Eden Carson and Sophie Oldershaw were frugal and picked up a wicket each.

The Sparks dropped three catches, though. That will earn them an extra training session, surely.

But Carson held on to a beauty off her own bowling. She had to really.

Sam Barriball crunched a kneecapper straight back at her. Thankfully she pouched it but stumbled backwards in the effort. It would have hurt had she missed it.

Bates actually got off to a pedestrian start by her standards. The 34-year-old struggled with the lack of pace.

There were a couple of nervy moments — an edge and a catch which almost carried.

But there is no replacement for power and the right-hander clubbed a couple of boundaries from a Lucy Boucher over to get her innings going.

But Katey Martin (7) was caught backing up too far and the in-form Kate Ebrahim (9) could not get going either.

But the Sparks were still well-placed to push on and post a good score. And Bates was instrumental in that plan. She brought up her 50 off 39 balls and was poised to unleash but did not get as much strike as she would have liked at the death.

Caitlin Blakely proved a willing support partner and added 16, while Bella James chipped in with 11.

The 18th over proved costly for the Brave. Fourteen runs came off it and that was four more than the Brave managed from any one over.

The teams will play a one-dayer at the venue today.