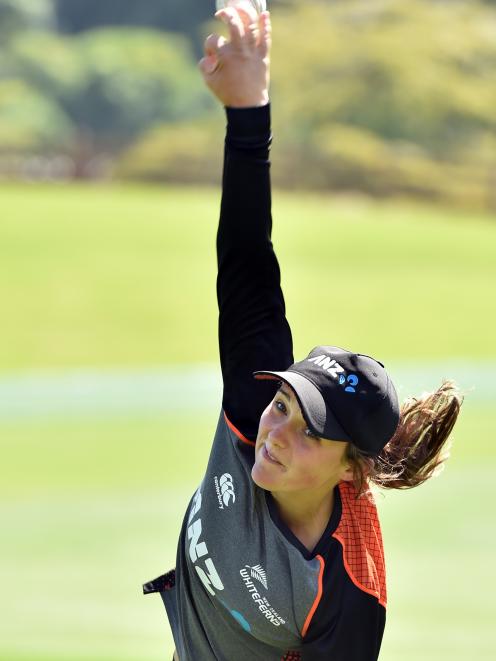 White Ferns spinner Amelia Kerr trains at the University of Otago Oval in Dunedin yesterday in preparation for the twenty20 international against South Africa at the ground today. Photo: Peter McIntosh
Amelia Kerr figured she was too short to remain a pace bowler.

Joel Garner she is not.

Offspin did not work out for the diminutive 19-year-old either. It just did not feel right.

So the dark art of legspin bowling it was. Encouraged by her father, former Wellington wicketkeeper Robbie Kerr, she set about mastering the hardest discipline in the game.

Not playing was probably not an option. Cricket is more or less a family tradition. Her grandfather, Bruce Murray, played 13 tests and more than 100 first-class games. Her mother, Jo Murray, played 10 limited-overs games for Wellington and her sister, Jess Kerr, made her international debut this year following a strong provincial campaign for Wellington.

‘‘Originally I was a pace bowler until I was about 10 years old,’’ she said.

‘‘It wasn’t working out for me with my height and everything, so I was just outside with my dad trying to bowl offspin . . .

‘‘Then I tried a few legspinners and dad thought it looked quite natural. So ever since that day I just kept practising legspinning and then he got me in to see [Wellington Blaze coach] Ivan Tissera, who I’ve been working with to this day.’’

It has been a productive partnership. Just four short years later she made her provincial debut for Wellington aged 14, and a couple of hundred days short of her 20th birthday has already matured into a classy international player.

She will add to her 28 T20 international appearances in game five of the series against South Africa in Dunedin today.

It is a big occasion for home-grown players Suzie Bates and Katey Martin, who have waited their entire international careers to play at home.

But Kerr said it was an important game for the whole squad. New Zealand leads the series 3-1 but wants to finish well to take some positive vibes into the ICC Women’s T20 World Cup which begins in Australia later this month.

‘‘It has been nice to play well in these T20s ... but heading into the World Cup this last game is really important for momentum.’’

Kerr feels the White Ferns are more comfortable with the T20 format because ‘‘we know our games really well and we’ve play so much T20 cricket’’.

‘‘We have some very explosive players which helps in the T20 format. But, in saying that, we do have a very good one-day side we just haven’t performed as well as we should have in the recent series.’’

None are more explosive than captain Sophie Devine. Remarkably she has scored 297 runs during the T20 series.

The University of Otago Oval has offered up a lot of runs recently. Otago scored 407 for four in a one-day match there late last month and notched 354 for six against Auckland on Sunday.

‘‘When I’ve played here in the past [for Wellington] it has always been a pretty good wicket and it is a quick outfield, so hopefully there will be lots of runs when we bat and we restrict them when we bowl.’’