Nine out of ten Doeschate phenomenal; rest not so much 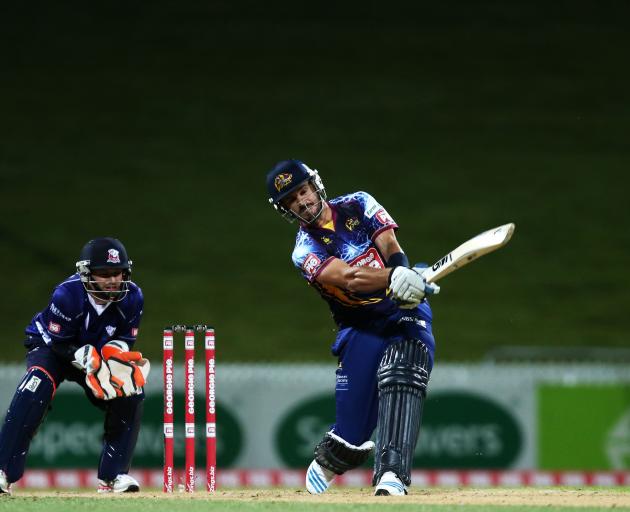 Ryan ten Doeschate hoicks it out of the ground against Auckland in 2014. Photo: Getty Images
The major associations have agreed not to employ overseas players for the Super Smash, including Otago which has cycled through its share of imports during the past 10 years. Cricket writer Adrian Seconi looks back over the good, the bad and the somewhere in-between.

The oil: Quality wicketkeeper but do you really need a top-drawer gloveman in T20?

The oil: The big-hitting all-rounder arrived late and may as well have left early. Got clobbered for 121 runs at more than 12.10 runs per over.

Verdict: Probably needed a longer stretch to adjust to the conditions. Three out of 10.

The oil: Came in as a temporary replacement for two matches in Alexandra during the holiday period. He made a golden duck in the first and holed out for 18 in the second.

Verdict: A long-odds punt who came in near the back of the field. Two out of 10.

The oil: The former Australian fast bowler was past his prime. Still had a run-up longer than Waqar Younis but was about as express as Gavin Larsen.

The oil: Dragged Otago through to a title in 2012-13 with some tremendous batting in the clutch. Could hit anything to cow.

The oil: Was a ring-in for the final, displacing Neil Wagner. He bowled, batted and fielded poorly. And Otago lost.

Verdict: Great player. Has gone on to captain the West Indies. It was not his night, though. Four out of 10.

Oil: Flew over for one match on the promise he would be available for the Champions League. The fast bowler ended up backing out of that agreement.

Verdict: It was quite surreal watching him run in for Otago. Impressive player. Impressive man. And he drew a crowd. Eight out of 10.

The oil: Helped Otago win the title in 2008-09 with some hard hitting in the middle and some useful wickets. Went on to coach the side for one season.

The oil: Famous for taking a nap while waiting to bat. Thereafter referred to as the narcoleptic trundler.

Verdict: Enjoyed the social aspects of life too much perhaps? Two out of 10.

The oil: Actually bowled quite well during the campaign.

Verdict:The better of the two English duds that year. Five out of 10.

The oil: The Pakistan all-rounder ran hot and cold. Could be quite devastating one minute and very average the next.

Verdict: Was a decade ago now but perhaps six out of 10.