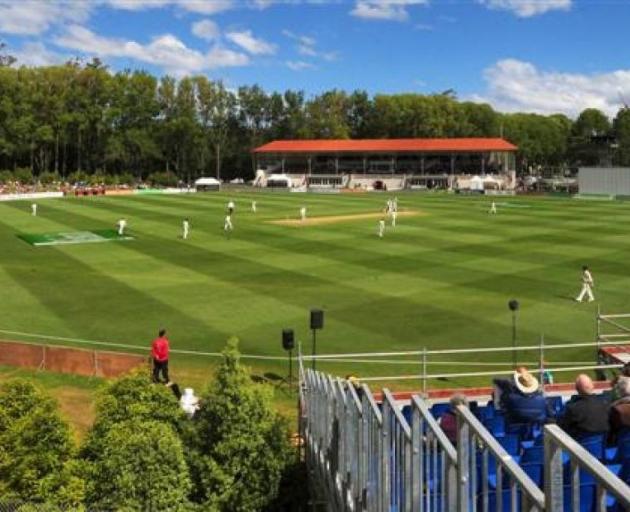 The University Oval. Photo ODT files.
The domestic schedule is out and the planners must be relying on climate change to kick in by spring.

A Plunket Shield game has been slated for Dunedin in late October.

Otago will host Auckland at the University of Otago Oval on October 30. It is the earliest a first-class fixture has been staged in the city in 155 years of cricket.

Otago Cricket Association chief executive Mike Coggan said the timing of the game had to be given "significant consideration by the ground staff".

"But as always, we are reliant on how the ground shapes after winter but also the state of what spring looks like," he said.

"That has not really changed in that regard. It is certainly a few weeks earlier but the ground staff have accepted it as a challenge.

"It was required as part of the full schedule to do what we've done, so we just have to get on with it."

There is no cast iron back-up plan but Coggan said the grounds staff were confident they could produce a pitch up to first-class standard.

The previous earliest first-class game at the venue began on November 5, 2016.

Queenstown has returned to the domestic schedule following a three-year hiatus.

The Volts will play the Wellington Firebirds in a one-dayer at the John Davies Oval.

Otago's last trip to the resort town was February, 2016 for a Plunket Shield encounter with Wellington.

But Coggan said some support from Queenstown Lakes Districts Council had helped.

"Clearly, they want to see more cricket because they invested in John Davies Oval ahead of the under-19 Cricket World Cup, so we're really pleased to be able to take a Ford Trophy fixture there."

Coggan said "costs will always be a consideration" but perhaps additional fixtures could be scheduled in Queenstown in the future.

Molyneux Park has remained on the roster despite the pitch falling well below the require standard last season.

The venue will host four twenty20 matches. The Otago Sparks and the Volts are playing back-to-back games there on December 29 and 30.

Coggan said the planned renovation of the pitch block will take place at the end of the season.

New Zealand Cricket will oversee the preparation this season to ensure the wicket is of a decent standard.

"The pitch still has some life in it and is able to sustain a couple of Super Smash games.

"But we have to be mindful that there is a new contractor in Delta and they will make sure it is up to speed," Coggan said.

"We don't want a repeat of last season."

The Super Smash begins on December 13 and winds up a month later. The men's final is on January 19 and the women's final a day earlier.

Both the one-day men's and women's competitions follow a similar structure to last season, while the Plunket Shield is an eight-round affair again.

There will be three rounds before Christmas and the final five rounds in the new year to close out the 2019-20 domestic season.