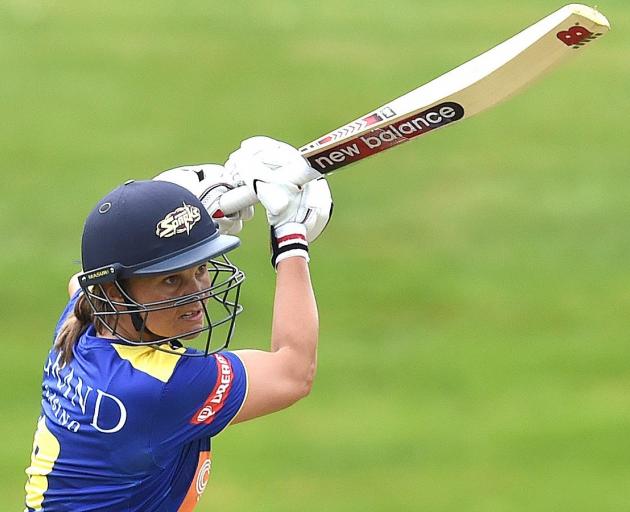 Sparks batter Suzie Bates hits straight during her side’s win over the Hinds at the University Oval yesterday. PHOTO: GREGOR RICHARDSON
If you thought the Central Hinds were cruising to victory, you would be wrong’un.

Otago wrist spinner Sophie Oldershaw helped her side edge the Hinds by eight runs in a tense finish to their opening Super Smash match at the University Oval yesterday.

She took three for 16 from an impressive spell but needed a lot of help from Hayley Jensen, who collected three wickets in a dramatic penultimate over.

The Sparks had posted 134 for six thanks to a fine knock of 64 by Suzie Bates.

That tally looked a little lean but a run out meltdown and some terrific bowling by Oldershaw turned the game.

The visiting side rallied with a damaging 59-run partnership, as Kerry-Anne Tomlinson (24) and Georgia Atkinson (37) threatened to swat their side to victory.

The Hinds required just 15 runs from the last two overs but Jensen took three wickets in four balls and finished with four for 20.

Kate Ebrahim picked up the final two wickets in the last over to help dismiss the Hinds for 126.

Bates was looking at ease and growing in confidence with every drive down the ground.

The 34-year-old right-hander struck Claudia Green for consecutive boundaries to inject more momentum into the innings.

The Sparks had a decent platform of 59 for one at the halfway point.

Bates brought up her 53rd twenty20 half-century, but just as her partnership with Katey Martin was starting to really flourish, it came unhinged when Martin was ran out for 29.

Bates went 10 runs later when she charged up the pitch but mistimed a lofted shot and was caught and bowled by Watkin, who took two for 22 in a tremendous spell.

The Sparks struggled to find the boundary in the final quarter of their innings and their total was on the light side as a result of that.

Watkin swung away a pull shot in the opening over of the chase to highlight that point.

Emma Black gave the Hinds another leg up with three wides in her opening over.

Watkin should have been gone on 15. She sliced a shot out to Bella James, who dropped a diving catch.

Spinner Eden Carson felt that shift in momentum more than most. Her first delivery got flogged over long-off for six by Watkin and another boundary disappeared through the covers.

The game was slipping away rather quickly.

But cricket is a crazy game. The Watkin-Natalie Dodd partnership was cruising but a mix up ended with them both stranded in the middle of the pitch.

It was a photo finish as to who was run out but Dodd (9) had her nose in front and had to go.

The road bump morphed into a way more serious hurdle when Oldershaw spun her wrong’un past both Emily Cunningham and Hannah Rowe in her first over.

Then the hammer blow came when Watkin blasted the ball to Bates and was undone for 32 from 24 balls.

Jensen got the breakthrough and in the space of eight balls the Hinds had slumped from 46 to none to 49 for four.

Oldershaw picked up a third when Mikaela Greig lofted her down the ground straight into the safe hands of Bates.

The Hinds had some fight left but Jensen snuffed it out with a clutch performance at the death.