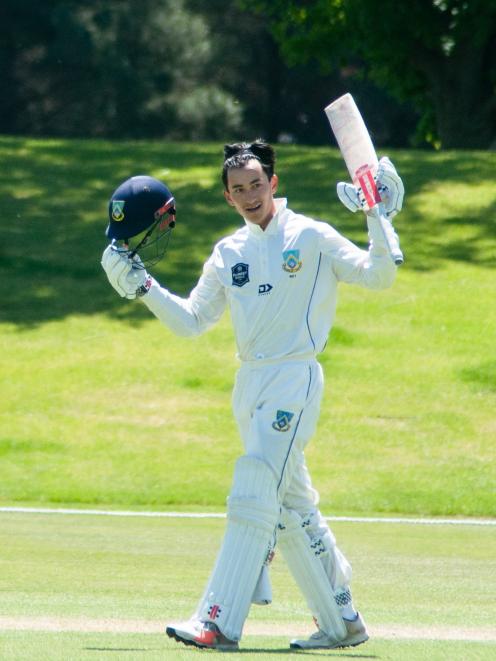 His gritty knock of 103 not out against Northern Districts helped bail his side out of a considerable hole at Molyneux Park.

With his almost six-hour effort Otago was able to reach a decent tally of 342.

Northern was 162 for one in reply at stumps on day two.

The Volts will need to make early inroads this morning after Jeet Raval (89) and Henry Cooper (63 not out) added 161 for the first wicket.

But the day belonged to Chu.

He strode to the crease on Monday with his side 115 for five.

The left-hander battled hard and was undefeated on 30 at stumps.

When the side resumed yesterday on 187 for seven there was still plenty of work to do to avoid sinking further into the mire.

The pair combined to put on an Otago ninth-wicket record stand against Northern Districts of 104.

Gibson played beautifully for his 50 — his maiden first-class half century.

He was eventually undone by Brett Randell, who got the ball to nip back and take a faint inside edge. Randell picked up a five-wicket bag with the dismissal and finished with five for 56.

That left No11 Jacob Duffy with the very important job of seeing Chu through to his hundred.

Chu looked odds-on to bring up the milestone against Central Districts at the University Oval earlier this month.

He got through to 94 but got a leading edge.

Otago had been batting towards a declaration target and Chu batted accordingly.

"But this was just about taking it a ball at a time and trying to do what was best for the lads," Chu said.

Arguably, he as under pressure to get on with it, though. Duffy is not the worst No11 around but he plays his shots and offers the bowler opportunities.

"I wasn't worried. I have a lot of faith in Jake. It was more about me trying not [to get out] so to hit one of the few gaps was nice."

He stroked a delivery from Zak Gibson through point for four to raise the milestone.

It was a lovely moment but the partnership with Jake Gibson meant just as much to him.

"It means a hell of a lot. He was fantastic to bat with. He was seeing the ball really nicely and I think coming in at No10 does not reflect the ability he has with the bat."

- Canterbury A defeated Otago A by three runs in a low-scoring twenty20 match in Rangiora yesterday.

Canterbury scored 98 but restricted Otago to 95 for eight.