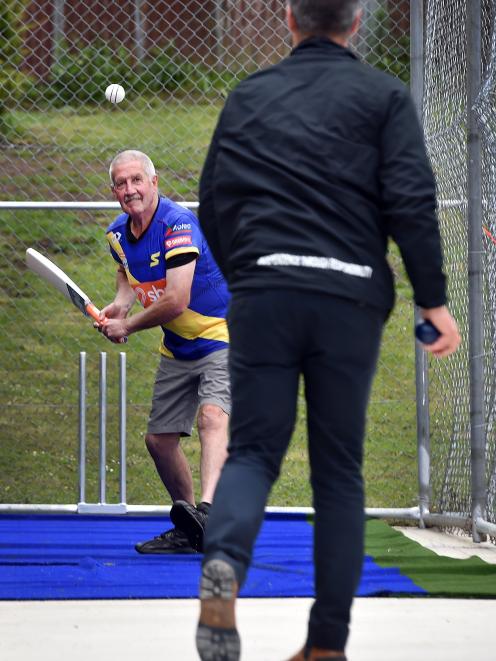 New Zealand cricket great Warren Lees gets on the front foot for a delivery from his son, Greg Lees, at the opening of the new cricket nets at Fairfield School yesterday. PHOTO: PETER MCINTOSH
Fairfield School has cricket running through its veins.

And now it has upgraded facilities to help grow the game.

The old playing surface was dilapidated, so the school board leaned on the community to see what could be done.

A new concrete pad was poured, and yesterday the nets were opened in a ceremony attended by a coterie of Otago cricket glitterati.

The improvements have be funded almost entirely by donations.

Board of trustees chairman Grant Pellowe said he hoped it would help inspire more children to take up the sport.

"It just gives them more opportunity to get involved in the game," he said.

The school’s cricket ties are extensive and the opening ceremony was a who’s who of Otago cricket.

Principal Greg Lees is the son of New Zealand cricket great Warren Lees. Warren Lees both played and coached at international level and has enjoyed a lifetime in the sport.

He sportingly squeezed into one of Suzie Bates’ shirts just so he would, well, look the part, while taking the first delivery during the opening ceremony.

Bates lives in the area and came down to support the opening.

The champion Sparks and White Fern batter suggested she might have had a bigger jersey in her bag for her former coach but where would the fun be in that?

Otago and former Black Cap Neil Broom has three sons — Connor, Luie and Zac — at the school and he joined Volts team-mate Dale Phillips at the opening.

There are the makings of a very good cricket team at that school.