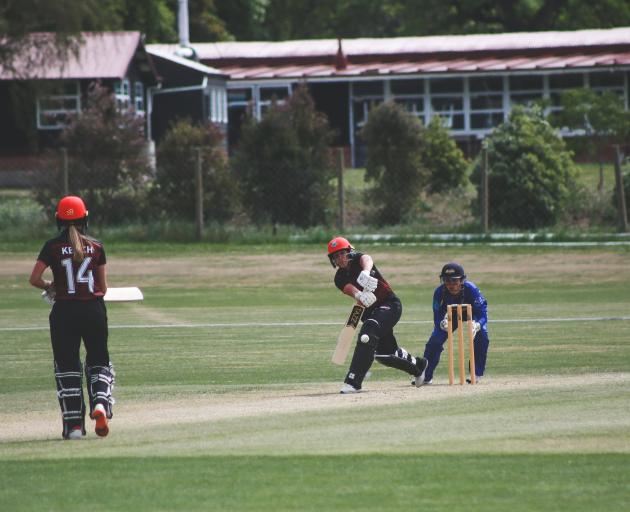 Canterbury captain Frances Mackay plays a shot on her way to a huge hundred during a one-day game against Otago in Oamaru on Saturday. Sparks wicketkeeper Polly Inglis and Canterbury batswoman Emma Kench watch. PHOTO: REBECCA RYAN
The Otago Sparks made a horror start to their campaign with heavy back-to-back losses to Canterbury in Oamaru during the weekend.

Canterbury captain Frances Mackay smacked a huge century on Saturday to help her side pile on more than 300 runs and record a very comfortable win.

But yesterday it was the bowlers’ turn to hog the limelight.

Sarah Asmussen (four for nine) and Kate Sims (three for 25) combined to help roll the Sparks for a paltry total of 89 and clinch a 133-run win.

"We’ve batted well, we’ve fielded well and we’ve bowled well — it just wasn’t all in the same game," he said.

"Now we know where we need to get to and we’ll work hard to do it — it has been a good weekend."

The Sparks were thumped in their opening game.

Mackay stroked 142 from 157 deliveries and Kate Ebrahim scored an undefeated 106 from 109 deliveries to help their side post a formidable 321 for four.

Mackay and Ebrahim put on 240 for the third wicket, a Canterbury record stand for any wicket.

Otago replied with 213 for eight from 46 overs to lose by 91 runs on the Duckworth-Lewis-Stern method.

The only real highlight for Otago was Caitlin Blakely posting a career-high 78, while Polly Inglis’ knock of 39 in her return for the Sparks was promising.

Otago bowled a little better and did well to restrict Canterbury to 222 for eight.

Sparks spearhead Emma Black led the way with three for 50 but blotted her copybook with 13 wides and one no ball.

Her side conceded 46 extras in total, which was way too many.

In the other games, Central Districts recorded back-to-back wins against Auckland in New Plymouth. The home team dismissed the Hearts for under 100 in both games.

At the Basin Reserve, Northern Districts beat Wellington by two-wickets in a final-over thriller on Saturday and backed up with an eight-wicket win yesterday.