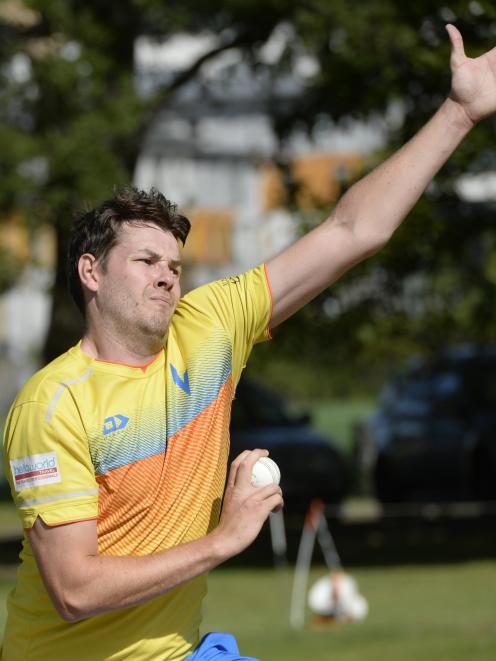 Otago captain Jacob Duffy sends down a delivery during a training session at the University of Otago Oval this week. Photo: Gregor Richardson
Forget not the bowlers.

All hype around the Otago team has been around its in-form batting line-up and how the top order could carry the Volts to their first one-day title in 12 years.

Otago will play Canterbury in the elimination final at Hagley Oval today.

Auckland awaits the winner. The Aces are hosting the final at Eden Park Outer Oval on Sunday.

The last time Otago won the one-day title it had to beat Canterbury in Christchurch and Auckland in Auckland.

You could read that as a positive omen.

Otago captain Jacob Duffy just laughed it off. He is putting his faith in his ability with the ball instead of a mildly spooky coincidence.

And so he should. The 25-year-old has taken eight wickets in the past two matches to help lift the Volts from fifth place and into a playoff match.

The batsman have played their part, of course. Neil Broom has scored two centuries during the campaign and averages 50.50, while Nick Kelly and Dean Foxcroft have scored more than 300 runs.

Opener Hamish Rutherford has been in sublime form all summer and will be expected to have a big impact on his return from New Zealand A duty.

But Otago’s underrated bowling unit, led by Duffy, has been one of the success stories.

The Volts do not have the firepower or the seaming stocks of some of the associations. But Otago does have plenty of useful slow-bowling options and Duffy has been pulling the right levers.

Left-arm wrist spinner Michael Rippon took a career-best five for 21 against Auckland in Dunedin on Sunday and has performed well during those middle overs.

Left-arm spinner Anaru Kitchen and right-arm offspinner Foxcroft have combined to take 17 wickets and not been too expensive, while all-rounder Nathan Smith is maturing into a really skilful player.

‘‘The batting unit has really held the team together but as a bowling unit we have been scrapping and fighting and doing what we do,’’ Duffy said.

He missed one match for Otago while he was with the New Zealand A side. He picked up a knee complaint while on national duty but said it was ‘‘actually a blessing in disguise’’.

‘‘I’ve been able to come back and play some good white-ball cricket and I’m feeling really good about my game.

‘‘I’m starting to feel what experience means now. I know my own game better and I’m really happy with where I’m at.’’

That experience had bubbled over into the sort of confidence you need when you are captaining a side and leading the bowling attack.

Otago’s strength is in its batting but Duffy would prefer to defend than chase and the statistics back him up.

‘‘Personally, I’m more comfortable defending. I hate watching the boys bat last and sweat through the chases. I like to be out there and be in a little bit more control.’’

The Volts have won five of the six gamesin which they have batted first and lost all three times when they have had to chase.

Of course, Duffy’s preference means he will end up bowling in the death when the game is on the line but that is how he likes it.

‘‘That is what you play for. Better that than sitting on the sideline watching the batters.’’