No surprise there — a bowler has pulled up lame following the big effort at the University Oval this week.
Six hundreds were scored during the first-class game between Otago and Central Districts and included in that, one of them was a double century.
Some of the seamers put a lot of miles on the clock for very little reward.

Jacob Duffy
Jacob Duffy bowled 34 overs in the first innings and another 18 in the second dig.
That is a chunky workload and a testament to his conditioning that he got through unscathed.
He picked up his 200th first-class scalp during the game and bowled well in patches on what was a tough surface for him.
Jake Gibson was not as lucky. He showed some promising signs in his second first-class outing. He nabbed four wickets in the first innings and one in the second.
But the right-armer medium pacer has been ruled out for the return game against the Stags beginning in Nelson tomorrow.
He has a hamstring problem and is sitting the game out as a precaution. Gibson will have company. Fast bowler Michael Rae has not recovered from the hamstring strain he picked in the opening game of the season against Wellington.
He had a fitness test on Thursday but pulled up tight yesterday. 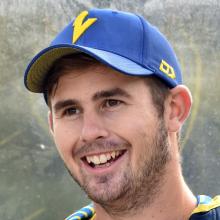 Jarrod McKay
Jarrod McKay comes in as a replacement for Gibson in the only change to the 12.
He will compete for a spot in the starting XI with Matt Bacon, who was 12th man against Central Districts.
Bacon picked up a five-wicket bag in Dunedin club cricket last weekend and may have the inside running.
The Otago Sparks strung back-to-back one-day wins against the Central Hinds at Saxton Oval last weekend.
They batted first in both games and put on decent scores, so it is very likely to be another batter-friendly surface, Volts coach Dion Ebrahim suggested.
‘‘There shouldn’t be any demons, it’s just a question of whether the pitch deteriorates as the game goes on,’’ he said.
‘‘Hopefully, there will be some variability in terms of pace, bounce and hopefully spin.’’
Otago was supposed to be hosting Northern Districts at Molyneux Park this round but that game had to be switched due to Covid-19.
The Volts’ fourth round game against Auckland at Eden Park beginning on November 15 has been postponed due to Covid-19 alert level restrictions.
The Stags team was unavailable yesterday but all-rounder Josh Clarkson picked up a side strain and is unlikely to play in this round.
Plunket Shield
Nelson, beginning tomorrow
Otago: Hamish Rutherford (captain), Mitchell Renwick, Dale Phillips, Nick Kelly, Anaru Kitchen, Michael Rippon, Max Chu, Angus McKenzie, Travis Muller, Jacob Duffy, Matt Bacon, Jarrod McKay.
Central Districts (possible): Greg Hay (captain), Bayley Wiggins, Brad Schmulian, Dane Cleaver, Tom  Bruce, Doug Bracewell, Ben Wheeler, Blair Tickner, Jayden Lennox, Ray Toole, Joey Field, Ben Smith.
Comment now