Stags batsman Will Young takes the ball during on the chin against the Volts at the University of Otago Oval yesterday. Volts wicketkeeper Mitch Renwick looks on. PHOTOS: GERARD O’BRIEN/GETTY IMAGES
Central Districts captain George Worker pummelled a maiden twenty20 century to power his side to a 53-run victory against Otago yesterday.

A crowd of just under 1000 was treated to some masterful batting from the visiting side at the University of Otago Oval.

Worker led the way with 106 from 58 deliveries to help his side post a ground-record 223 for five.

Black Caps back-up test batsman Will Young was in majestic form as well and stroked a rapid half-century in the Super Smash encounter.

The pair put on 87 for the second wicket to build a threatening platform.

Worker kept up the assault following Young’s departure for 50. He dispatched eight sixes and six boundaries during his onslaught.

And Josh Clarkson smashed 33 from 17 to help push the final tally past the previous ground record. 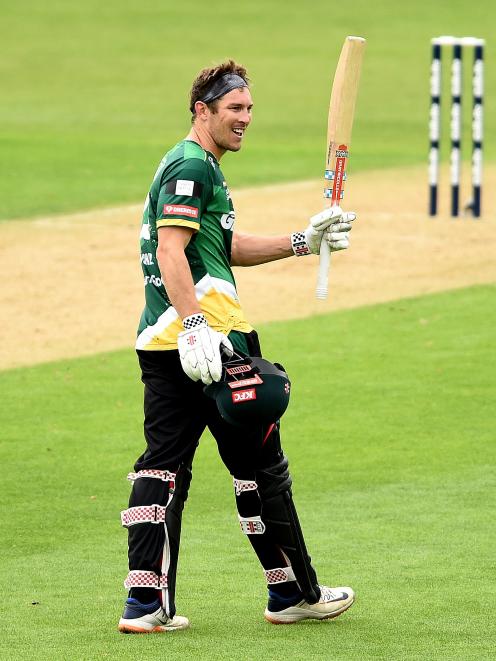 Worker set the tone early. He lofted a delivery from left-arm spinner Anaru Kitchen down the ground for a massive six second ball of the game.

It was not a bad powerplay from the Volts. They picked up the wicket of Bayley Wiggins and kept the score to 56.

But the problem was Worker was well set and Young was striking the ball so wonderfully well.

Worker stroked a six to raise his half-century from 33 balls, and Young was not far behind.

He caressed the ball into the offside for a single to bring up the milestone from just 24 deliveries.

He was timing the ball magnificently but that touch deserted him shortly after.

Mitch McClenaghan had been brought back in to get the breakthrough and he delivered.

Importantly, he went for just five runs and helped halt the momentum briefly.

But Worker kept up the pressure and reached three figures off 56 balls.

And Clarkson played a destructive cameo to nudge the target towards the unachievable.

The Volts lost Neil Broom early for a brisk 15 from seven balls and then Hamish Rutherford fluffed a drive towards the end of the powerplay and had to go for 25.

Nick Kelly still believed but, with five overs remaining, Otago needed 92 to win and that is basically impossible.

Kudos to Kelly for his innings of 75. He was run out last ball but, had someone stayed with him, Otago might have been able to make it more of a contest.

Stags spinner Ajaz Patel picked up consecutive wickets at the start of the 16th over and finished with three for 34.