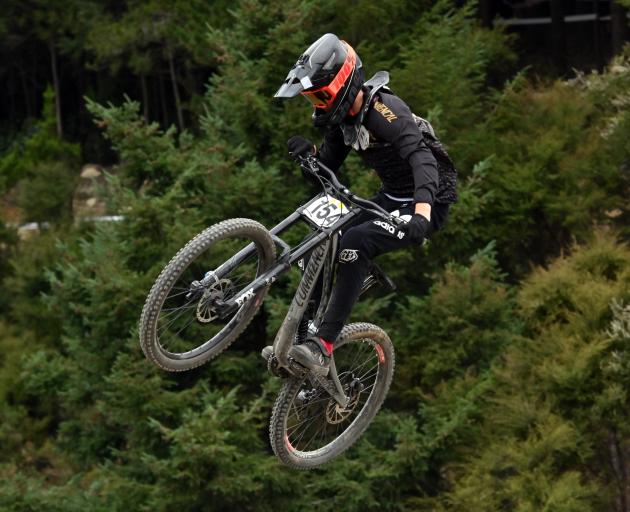 Ben Sziranyi, of Blenheim, flies high in a downhill race at the Oceania championships at Signal Hill on Saturday. Photo: Linda Robertson
Sian A’Hern had a good time on her first trip to New Zealand.

The world No10 claimed the elite women’s downhill title at the Oceania Mountain Bike Championships on Saturday.

It was the first time the Australian had raced in New Zealand, but she made no mistake in defending her title at Signal Hill.

She completed the course in 3min 22.83sec, giving her a 3sec gap over top New Zealander Shania Rawson.

After a crash in seeding, she focused on having a smoother run on Saturday and hoped that would be enough to take the title.

That left her "super stoked" and she had enjoyed her first experience in New Zealand.

"It’s a bit of a shocker, I’ve never ridden in New Zealand before," she said.

"I’ve been everywhere else around the globe.

"But I definitely want to come back, do a bit of riding around Queenstown and Rotorua. It’s one of those places you’ve got to see as a mountain biker."

He said he always enjoyed racing in Dunedin and was glad the day had remained dry.

While rain was expected, a dry track meant the riders could push it to the edge, rather than just making their way down.

That was something he looked to do from the start.

"Basically, I just wanted to push the top as hard as I could and I did that and rode really good and clean. The middle part was decent," he said.

"I felt OK near the finish, so I just relaxed near the bottom and then I just went off line a little bit in the last corner.

"I ended up hitting a tree so I lost a bit of speed near the bottom section.

"But other than that, it was a pretty perfect run, so you can’t really complain.

"I’m pretty stoked to take the win and also take it by quite a decent margin.