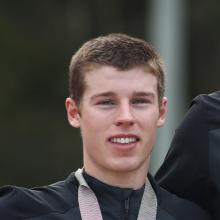 Cooper was a convincing winner of the elite cross-country race at the national championships at Signal Hill yesterday.

He won by just over 4min from Josh Burnett, of Invercargill, who won the under-23 jersey for his efforts.

Cooper was in a race with fellow national representative Sam Gaze over the first lap but pulled away in the climb at the start of the second lap and never looked back.

Gaze ended up pulling out of the race and did not finish.

Cooper said after the race the plan was to go out strong and try to break Gaze.

"I knew Sam was strong and so I put in a good stint on that uphill going into that second lap, into that steep pitch and kept it going," he said.

That left him out in front and he had to ride the rest of the race on his own.

"It looks easy being out in front but it never is as you have to ride to your own tempo. You haven’t got that carrot to chase."

Cooper (25) had won the Oceania championships on Friday so he had a good weekend. It was a big year for him, the Tokyo Olympics his obvious goal.

He had ridden the Tokyo course late last year and said it was a good course which would hopefully suit his style. The qualification for the Games came down to certain races but it was good to win your own national championships, he said.

"That is always cool. You never tire of winning. It doesn’t matter how many times it happens.

"The training can be hard and tough but winning makes it worthwhile and you never know when your last one is going to happen."

Cooper was not the only double winner over the weekend. Sam Blenkinsop, of Christchurch, had won the Oceania downhill title on Saturday and he backed that up with the national title yesterday.

He won, less than a second from Sam Gale (Nelson).

The downhill elite women’s title was won by Shania Rawson, of Tauranga while Sam Hope, of Dunedin, won the female sport grade.

Jessica Blewitt, of Queenstown, won the downhill under-19 title.