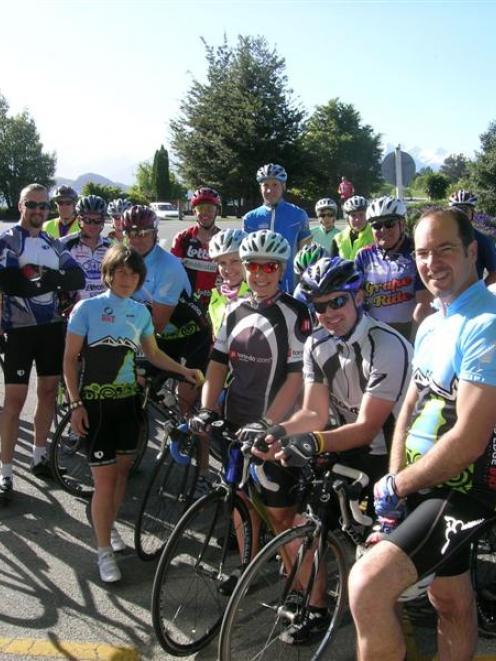 It's 6pm on a Monday night and about 30 cyclists have assembled outside Racer's Edge Bike.

The fluoro-attired crew are aged somewhere between 17 and 70 and regard themselves as "beginners" in road cycling.

Tonight, they are going to learn about the rolling, big-bunch ride.

Group leader Jon Andrews issues instructions and they head out in two lines to cycle the potholed Cardrona Valley Rd.

Instructions to stick to 23-25kmh are mostly ignored, forcing Andrews or his co-leader, Lucy Fullerton, to sprint up front and weigh the anchors.

At the half-way turnaround, the group stops. This time, Andrews wants the cyclists, still in two lines, to put their hands on their partner's backs or lean against each other.

There are a few horrified expressions but they do as he asks, resulting in an appreciable drop in intensity.

With 10km to go in the 45km ride, Andrews gives permission for the bolters to break away.

After a flurry, two groups sort themselves out for a 40kmh chase, leaving a handful behind to chug home on their own steam.

Everyone finishes smiling, with another lesson in cycling etiquette and technique under their belt.

Andrews said he had no preconceptions about the Monday night group because he was not in Wanaka last year when it formed.

"But cycling is huge. It definitely is. You notice it here. People tell me 10 years ago they would go for a ride and would know the other two or three people they would see riding, whereas now they see people they don't know."

Cycling was "good for the body, low-impact as long as you are set up right . . . It is a lovely sport."

Andrews has a good eye for technique but no longer coaches formally.

"Part of my personality is I like helping people. I do look at people on their bikes and think, `I should change that there, help them become more powerful or stronger'," he said.

Monday night riding became an institution in Christchurch when Coast-to-Coast competitors realised they had to learn bunch riding to do well.

"There would be 50 riders in the two months leading up to the Coast-to-Coast. It was really good fun. Everyone learned a lot."

Big-bunch riding is new in the Upper Clutha.

During the peak of his career, his peers included fellow Olympians Gary Anderson and Brian Fowler. Andrews retired at a relatively young age of 27, when he was at the top and felt he had achieved all he could.

Eager to lead a balanced, positive life after retiring, he obtained a bachelor in business computing degree from Christchurch Polytechnic and then worked as an information technology analyst for the Government in Wellington.

Andrews, his wife Angela Mote-Andrews and their daughters Ellesse and Zoe moved to Wanaka from Wellington at the beginning of this yearafter Mrs Mote-Andrews was appointed head of music at Mt Aspiring College.

Andrews was quickly snapped up by Wanaka bike shop Racers Edge Bike and has established his own business, Central IT Services.

He still follows cycling and is excited about the latest crop of New Zealand riders.

He is also pursuing interests in kayaking and mountain-biking.