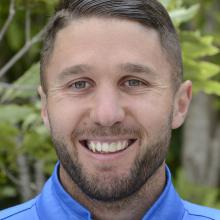 Liam Little
The Chatham Cup fourth-round match between Roslyn Wakari and Caversham was a classic, played in blustery conditions at Ellis Park yesterday.

With seven minutes on the clock a long throw-in from Caversham's Ben Kiore found Kaleb De Groot-Green in the penalty area and he side-footed home.

Caversham made the most of the windy conditions and a smart save from Roslyn's Tom Stevens denied Connor Neil.

However, Neil got his goal in the 19th minute after a great cross from Campbell Thomson.

The pace of Neil and Kiore caused Roslyn headaches.

Roslyn grew into the match and the front three of Kinghorn, Nathan Wilkie and Luke Clissold started to assert themselves.

Wilkie's shot in the 44th minute came down off the crossbar but did not cross the line.

A minute later, Clissold did score for Roslyn, when his shot was arrowed into the bottom corner.

Reid Hulleman nearly equalised for Roslyn on the stroke of halftime when his jinky run carried him into the box.

The equaliser arrived on 57 minutes when Wilkie slotted home after great hold-up play by Kinghorn. His layoff to Clissold allowed him to pick out Wilkie.

Roslyn was in the ascendancy and Caversham was doing well to repel the constant threats.

Kinghorn went down in the box following a shove. However referee Calvin Berg waved away the penalty appeal.

A clearing kick by Liam Little was caught in the wind and spun backwards and only a last-ditch tackle by Eden Souter-Napier denied Kinghorn.

With time nearly up, Little again denied Kinghorn and the ball fell kindly to Hiromu Iizuka but the shot was blazed over the crossbar.

In extra time, both teams continued to create chances that were just off target or saved by the keepers.

Caversham withstood a barrage and got the winner in the 113th minute when De Groot-Green stabbed home. He finished off Neil's initial shot, which hit the post.

The officials conferred before ruling the goal could stand.

The home fans erupted when Kinghorn scored with a back heel with only moments left but it was rightly ruled out for offside.

There were two games in the Southern Championship on Saturday.

Green Island won 5-2, after a dream start resulted in Chris Kessell and Matt Brazier both scoring braces within 16 minutes.

Oscar McCallion made it 5-0 after 36 minutes, before Wanaka hit back twice.

Tim McLennan scored early for Tech, before Caleb Russ and Daniel Kibby made it 3-0.

Nobuhiro Kojima scored with five minutes to play for Southland, then Kento Shimamura reduced the margin to one in injury time.