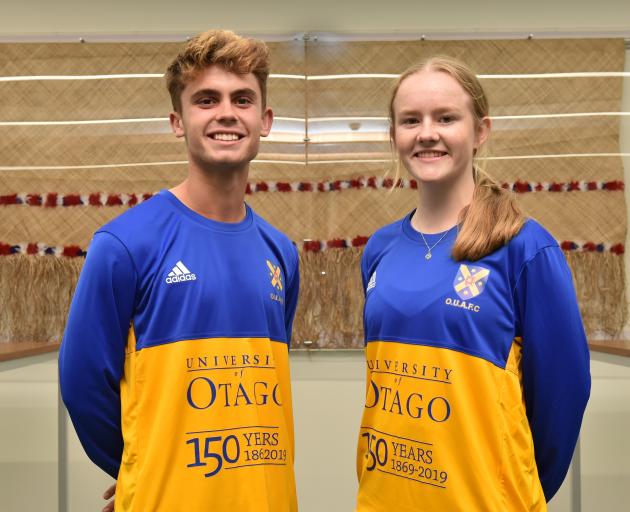 University of Otago Football Club players Oban Hawkins and Erin Roxburgh show off the 150th anniversary strip at a function yesterday to mark the season opening. Photo: Gregor Richardson
Otago University Football Club will have a new feel to it this year.

The club has a new Maori name, a new home facility and a special commemorative uniform.

That all comes as the university celebrates its 150th anniversary.

The club held a season launch at the Otago Business School last night at which it unveiled the new kit and name.

The uniform commemorates the university's anniversary and will be worn on special occasions this season.

The club went through the Treaty of Waitangi Committee process in adopting it, the name being gifted to the club.

''The name was adopted to acknowledge the special relationship between the University and its community, and the mana whenua including the local Ngai Tahu tribe with historic links to the water of Leith area near the club's home at Logan Park,'' club life member and women's premier coach James Coombes said.

This year the club will also move to its new home - Football South's Home of Football.

That comprises the two artificial turfs built on the club's existing training fields at Logan Park.

Games start next weekend, and the club is fielding six men's and four women's teams this year.