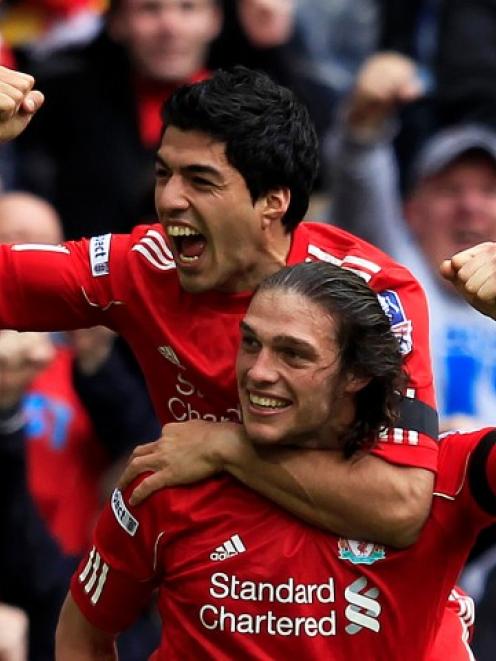 Liverpool's Andy Carroll (bottom) celebrates his goal against Everton with teammate Luis Suarez during their FA Cup semifinal at Wembley Stadium in London. REUTERS/Eddie Keogh
Liverpool strikers Andy Carroll and Luis Suarez put all their troubles behind them to fire their team to a 2-1 win over local rivals Everton in a nerve-jangling FA Cup semifinal at Wembley Stadium.

They will face the winners of Sunday's clash between London rivals Tottenham Hotspur and Chelsea in the May 5 final.

Uruguayan Suarez, banned earlier this season after racially insulting Manchester United's fullback Patrice Evra, scored Liverpool's equaliser to put his side back in the game following a mistake by Everton's Sylvain Distin after 62 minutes.

Carroll, who has been roundly criticised for his lack of goals since his British record 35 million pounds transfer from Newcastle United last year, headed the winner three minutes from time.

He had earlier missed easier chances, the first just after halftime when he headed wide two metres from goal, but he told ESPN that scoring the winner was "the best feeling ever".

The 23-year-old Geordie added: "It's a great feeling. I've had some criticism but I've kept on going. I've got the winner here and I believe in myself every day."

Suarez's equaliser and Carroll's winner ripped the heart out of an Everton side who deservedly went ahead with a 24th minute strike from their Croatia forward Nikica Jelavic.

Both Jelavic's goal and Suarez's strike came after defensive errors with Jelavic benefiting from a mix-up between Jamie Carragher and Daniel Agger who failed to clear a loose ball.

Suarez struck after Distin underhit a backpass into his path. That mistake by the Frenchman changed the course of the game.

Liverpool, who had played poorly until then, gradually took control after Suarez's goal and in the end just about deserved to reach their first FA Cup final since 2006.

The game looked to be heading into extra time when Everton substitute Seamus Coleman needlessly fouled Liverpool skipper Steven Gerrard to concede a free-kick wide on the left.

Craig Bellamy, who had only been on the pitch for a few minutes, whipped in a perfect cross which Carroll glanced past the despairing Everton keeper Tim Howard.

While Suarez and Carroll have had their personal difficulties, Liverpool generally have underperformed in the Premier League, and their owners acted to change that this week when they dismissed the club's Director of Football.

Daniel Comolli left the club as a result of the perceived failure of his transfer policy -- which included the expensive acquisitions of Suarez and Carroll.

Liverpool manager Kenny Dalglish, who said on Friday he had a good working relationship with Comolli, believed his side deserved to reach their second final of the season after winning the League Cup against Cardiff City in February.

"The players who were out there and those who have made a contribution through the run, have been fantastic, their application was there for everyone to see," he told reporters.

"Everything you need to win a game of football we showed today as a team.

"It was fantastic, it has not been too good over the last few weeks but that's two cup finals, one we've won and one we're looking forward to. It gives everyone a lift. We're very proud and pleased."

He refused to single out Carroll's contribution, though, adding: "It's not time to individualise performances, it's a time to enjoy the moment, be respectful to Everton, now get fully focused on the league games. We need to, it's not a tap you can turn on and off."

"I thought we played well enough to be in front, we expected them to come out (and attack) in the second half - it's an FA Cup semi-final - but I thought we'd weathered it.

"We were just getting back into the game when the mistake happened."

After giving Distin a pat on the back at the end, Moyes said: "He's really down, he's an experienced player, he's won the Cup here and he knows exactly what it means, he's been great for us so he's disappointed.

"We were so desperate to get to the final for the supporters, we felt we were in good shape and in good mind to get the final. I felt for them all, we are all in it together.

"There was little between the two teams, mistakes have changed the game, (it) was very tight, I thought that before the game."

Everton, who had been more inventive in the opening stages, went ahead after 24 minutes following a terrible defensive mix-up between Carragher and Agger on the edge of the Liverpool penalty area.

They failed to deal with the bouncing ball, each one leaving it to the other, before Carragher attempted to clear, slipped and kicked the ball straight at Tim Cahill's chest.

It bounced loose to Jelavic who took his opportunity brilliantly, firing low past stand-in keeper Brad Jones for his sixth goal in his 11th appearance since joining the club for a bargain 5.5 million pounds from Rangers in January.

The weekend marked the 23rd anniversary of the Hillsborough disaster when 96 Liverpool fans died at the semi-final against Nottingham Forest on April 15, 1989 and the afternoon began with a perfectly observed minute's silence from both sets of fans.

The two sides had not met at Wembley since the 1989 final, which took place five weeks after the tragedy. Liverpool won that game 3-2, their second FA Cup final victory over Everton in four seasons following their 3-1 win in the 1986 final.

Everton were the in-form team ahead of Saturday's match but Liverpool maintained their FA Cup superiority, as they have done in the past 50 years having not lost to their rivals in a semi-final in three meetings since their last defeat to them in 1906.