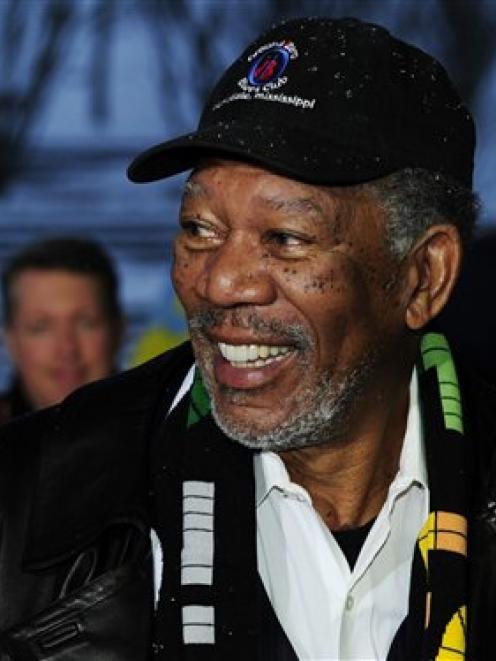 US actor Morgan Freeman arrives with the US delegation at the Fifa headquarters in Zurich, Switzerland to present their bid to host the football World Cup in 2022. Photo by AP
Hollywood star Morgan Freeman missed a page of his speech. Bill Clinton rambled on over time.
Proof, if ever any were needed, the pressure of delivering final World Cup presentations to Fifa can get to the most polished performers.
The big name Americans were not alone, Football Federation Australia chief executive Ben Buckley looked nervous at times and supermodel Elle Macpherson a bit edgy.
Even Frank Lowy messed up some of his words when he went off script before recovering to deliver a passionate performance.
However the big surprise was Clinton, the man who normally oozes charisma out of every pore on his body, producing a laboured performance.
While the value of the half-hour presentations in swaying Fifa big wigs is debatable, dragging the American pitch seven minutes over time was not wise on his part.
Australia pulled its performance up a few minutes short, as Lowy said it is best not to ``annoy them'' with nine bid presentations heard over two days.
Clinton was viewed as one of the US' trump cards with his legendary appeal but he spent chunks of his speech talking about his charitable foundation rather than pitching his nation's bid.
With Chicago exiting early in last year's 2016 Olympic bid following his late dash, US President Barack Obama decided to stay at home this time around.
He had not been missed until Clinton's lifeless display.
In terms of other presentations, Australia's pitch was pretty good.
It may have been a bit cliched but the cheeky cartoon kangaroo is going to linger longer in the mind than the countless graphs and figures from its rivals.
South Korea's message of reunification was its central message, it seemed the toughest of sells for the 2002 hosts with North Korea lobbing missiles over the border in recent days.
With a damning evaluation report from Fifa, Qatar needed to produce a mesmerising performance and did just that.
All their speakers nailed their lines while Australian film director Derin Seale showed the million of dollars pumped into his short film had not gone to waste with a moving experience.
Qatar called on Fifa to let them bridge the religious divide with the West by bringing the tournament to the Middle East for the first time.
With temperatures typically hitting near the 50 degree mark in June and July, even a beautiful production and technological promise can not hide such shortcomings.
``Heat is not and will not be an issue,'' said bid boss Hassan al-Thawadi.
He conceded Qatar would be a ``bold gamble'' but insisted there would be ``no risks.''
European football clubs and players might see otherwise.
Last of all, 2002 co-hosts Japan pledged a technologically mind-blowing experience.
It said by 2022 it could beam games to iconic stadiums around the planet using revolutionary 3-D technology to make it seem as though players are rising out of the ground.
The action in Japan would be filmed using hundreds of cameras and broadcast to screens laid flat on the pitches of iconic locations.
Sony chairman and chief executive Howard Stringer said the so-called Full Court 3-D Vision would work.
``This is not science fiction,'' he said. ``In 2022, this will be science fact.''
But it still won't be real thing, will it.
AAP
Comment now