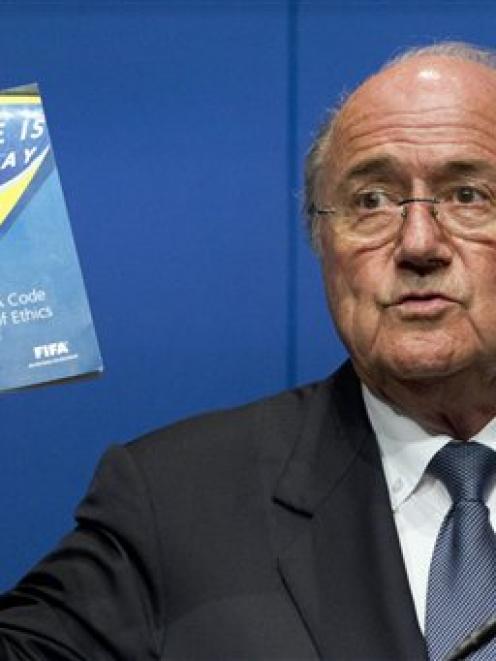 Sepp Blatter. Photo AP
Sepp Blatter has been re-elected FIFA president after a major bribery scandal left him as the only candidate to deal with a sport reeling from a wave of corruption allegations.

Blatter, a 75-year-old Swiss executive who has been in office since 1998, was handed a final four-year term as head of football's governing body in a vote at FIFA's congress.

After a tense week of drama and controversy surrounding his unchallenged candidacy, Blatter was beaming as he came into the congress hall to a standing ovation and warm applause after the result was announced.

He immediately took steps toward major reform by winning the assembly's backing for his proposal to have future World Cup hosts selected in a vote of all 208 federations instead of the 24-man executive committee. The congress also endorsed his plans to revamp the ethics committee and bring in more transparency.

Blatter said he also planned to appoint a woman to the executive committee.

FIFA will meet again later this year to formally adopt the measures.

"We will put FIFA's ship back on the right course in clear transparent waters," he said in French. "We will need some time. We cannot do it from one day to the next. It's a new challenge for me and I accept it."

The election went ahead after England's call for a postponement of Blatter's unopposed "coronation" amid the ethics crisis was overwhelmingly rejected by the delegates. England's FA chairman David Bernstein left before the vote.

Hours earlier, Blatter promised fundamental reform to tackle the scandals and vowed to let the 208 national federations choose the host of future World Cups instead of the 24-man executive committee.

The re-election completed a frantic week for Blatter, who strained under the weight of accusations targeting the top echelons of FIFA and himself as guardian of the game and the World Cup.

"We have been hit and I personally have been slapped," Blatter said. "I don't want that ever again."

The impending election of an incumbent as the only candidate had dealt a serious blow to FIFA's democratic credentials over the past week.

Despite the bribery scandal that saw the heads of the Asian and CONCACAF confederations suspended, the overwhelming backing was a ringing endorsement for Blatter.

"I am happy we are able to bring this solidarity, this unity in FIFA," Blatter said.

Bernstein had called for a postponement of the election for several months to allow for the scandals to be cleared up, saying that "a coronation without an opponent provides a flawed mandate."

However, 172 of the 208 delegations rejected England's call, clearing the way for the election to proceed.

Blatter said the worst scandal in the body's history could be solved within FIFA itself and with him in charge.

"The FIFA ship is in troubled waters but this ship must be brought back on the right track," Blatter said in an opening address. "I am the captain of the ship."

"It is therefore my duty and responsibility to see to it that we get back on track."

To make sure his legacy would not be seen as one of a leader who let the rot of corruption take over the world's premier game, Blatter promised to improve decision-making and openness in FIFA.

"Reforms will be made and not just touchups but radical decisions," Blatter said in his speech to the 208 delegations.

He insisted that reform should come from within the FIFA family, snubbing calls for independent, outside oversight that many critics had insisted on and he himself had promised.

IOC President Jacques Rogge told Blatter on the eve of the election that only drastic measures to improve democracy and transparency had saved the Olympic movement when it faced a similar corruption scandal in the run-up to the 2002 Salt Lake City Winter Games.

"We have made mistakes, but we will draw our conclusions," Blatter said.

On Monday, FIFA secretary general Jerome Valcke was forced to acknowledge he had written in an email that Qatar "bought" the 2022 World Cup. He said he was only referring to Qatar's formidable financial clout, and that he never accused the Gulf country of buying votes.

On Wednesday, German federation President Theo Zwanziger said Qatar's victory in December's vote should be reviewed in light of "speculations and corruption allegations." Qatar has denied any wrongdoing.

In a major policy shift, Blatter said he would work to make sure that the awarding of future World Cup hosts would be decided in a vote of all federations instead of the two dozen executive committee members, several of whom have been involved in bribery scandals.

Just ahead of the election, FIFA's financial officers highlighted the enormous importance of the sport's showcase tournament.

FIFA made a $US631 million profit in the four years leading up to the 2010 World Cup in South Africa, registering $202 million of that in last year alone.

The four-year financial cycle showed income of $4.19 billion from broadcast and commercial deals, with 87 percent tied directly to the World Cup.

So far, Blatter's dogged determination to bring the World Cup to Africa with the successful staging of South Africa 2010 stands out as his legacy. In his last four years, his ability to reform the governance of the sport could mean as much for his place his history.

A fourth term will give Blatter a total of 17 years at the head of FIFA. Add the 24 years of his predecessor Joao Havelange, and the sport will have been in the hands of just two men over the past four decades.