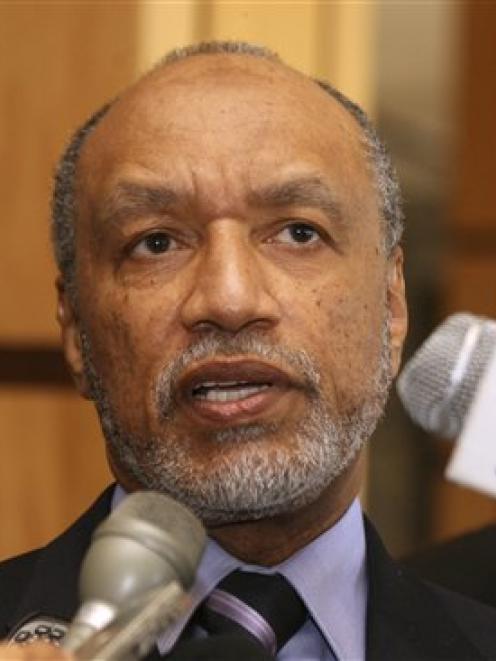 Mohamed bin Hammam. AP photo
One week before FIFA's presidential election, a new bribery scandal erupted that could destroy the candidacy of Sepp Blatter's only rival and punish one of the federation's longtime power brokers.

FIFA on Wednesday summoned Asian Football Confederation leader Mohamed bin Hammam and FIFA vice-president Jack Warner to an ethics hearing on Sunday to face allegations of corruption during the Qatari official's campaign visit to Trinidad two weeks ago. The timing and the source of the allegations, longtime Warner ally Chuck Blazer of the United States, gives them a gravity not seen with FIFA's other scandals.

Bin Hammam hopes to end Blatter's 13-year presidency in a June 1 vote of FIFA's 208 national members. But he could wind up barred from the vote in Zurich if the ethics panel decides to provisionally suspend him from all football duties while it prepares its case - leaving the 75-year-old Blatter clear to claim a fourth and final four-year term atop the governing body for the world's most popular sport.

Bin Hammam denied wrongdoing and suggested, on "a difficult and painful day for me," that the accusations were instigated by Blatter's camp.

"This move is little more than a tactic being used by those who have no confidence in their own ability to emerge successfully from the FIFA presidential election," bin Hammam wrote in a statement published on his official website.

The allegations mark a stunning reversal of fortune for bin Hammam, who only six months ago helped guide his native Qatar to the 2022 World Cup hosting rights in another FIFA election marked by intrigue and accusation. FIFA is already examining allegations levelled in England that Qatar paid two FIFA executive committee members $US1.5 million bribes for their support.

But unlike previous FIFA scandals, the allegations unveiled on Wednesday did not come from leaked documents or undercover stings by the media. They came from Blazer, one of FIFA's own.

Blazer is general secretary of CONCACAF, the Confederation of North, Central America and Caribbean Association Football, and has served on FIFA's executive committee for 15 years. Bin Hammam is also a member of the executive committee, and Warner is a FIFA vice-president and CONCACAF president.

FIFA said the bribery allegations are related to bin Hammam's meeting with 25 Caribbean football leaders on May 10-11 in Warner's native Trinidad to lobby support for his candidacy. According to The Daily Telegraph, Caribbean Football Union members were offered $US40,000 in exchange for their votes in the upcoming election.

"We filed a comprehensive file covering what we believe to be various types of violations," Blazer said when reached on Wednesday by The Associated Press, declining further comment.

The investigation was conducted by John P. Collins, a former federal prosecutor whose clients now include CONCACAF. Collins is also a member of FIFA's legal committee.

Warner said he was "unaware of the particulars" of FIFA's investigation, and also questioned why the case was made public now.

"It is interesting to note the timing of these allegations and the hearing scheduled days before the FIFA presidential elections," Warner said in a statement.

The alleged plot puts FIFA's reputation for corruption in a harsher spotlight than ever before.

Bin Hammam and Warner have served a total of 43 years in FIFA's high command and, as confederation bosses, represent 81 football nations. Both were re-elected unopposed to four-year terms this year. They face lengthy suspensions from all football duties if bribery allegations are proven.

Blatter remained silent on Wednesday, but has made the fight against corruption one of the pillars of his re-election campaign.

The ethics probe was ordered by FIFA secretary general Jerome Valcke after studying Blazer's report on the meeting in Trinidad.

Bin Hammam helped organize the hastily arranged meeting after he was unable to attend the annual CONCACAF congress one week earlier in Miami. The 62-year-old Qatari was denied a visa to enter the US, despite travelling on a diplomatic passport, and his absence allowed Blatter to lobby for votes in Miami unchallenged.

Warner has long been a key powerbroker in FIFA politics, and his backing was seen as vital to bin Hammam's hopes. Blatter has been endorsed by confederation leaders in Africa, Europe, Oceania and South America.

Warner's 35-member confederation was expected to back a candidate next Monday in Zurich at a meeting that might proceed without its president.

But bin Hammam and Warner could both find themselves on the sidelines for the election. When two FIFA executive committee members were accused of corruption before the December vote for the 2018 and 2022 World Cups, the ethics panel imposed provisional suspensions on both so it would have time to build cases against them.

Three weeks later, Amos Adamu got a three-year ban for seeking bribes. Reynald Temarii was suspended for one year.

"I am confident that there is no charge to answer and that I will be free to stand ... as originally planned," bin Hammam wrote. "If there is even the slightest justice in the world, these allegations will vanish in the wind."

On Wednesday, a whistleblower from the Qatar bid had been scheduled to submit evidence to Valcke and FIFA legal director Marco Villiger in Zurich. African FIFA officials Issa Hayatou and Jacques Anouma have denied pocketing bribes.

However, FIFA said the whistleblower "decided not to attend the meeting" based on legal advice.

FIFA is also weighing action against Warner, and three more FIFA executive colleagues, who have been accused of unethical behavior in a British lawmakers' hearing this month.