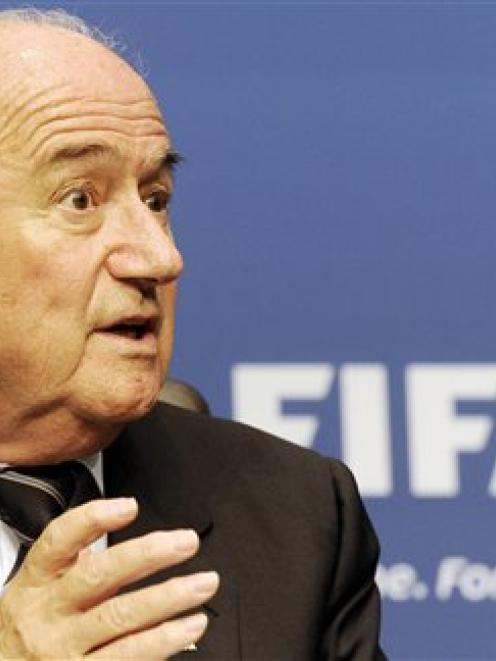 Blatter, meanwhile, picked up a key endorsement from a regional bloc in his bid for re-election on June 1.

English claims that six members of FIFA's executive committee were involved in corruption during the 2018 and 2022 World Cup bidding contests have thrown Blatter's bid to control the campaign agenda into disarray.

Since the accusations were made in the British parliament on Tuesday, FIFA demanded to see evidence to back up the claims against a quarter of the 24-man group that runs world football. 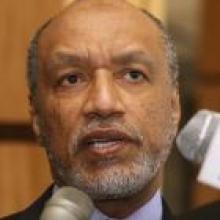 Bin Hammam, a 61-year-old Qatari who heads the Asian confederation, responded to the ethics crisis on Thursday by criticizing Blatter on his blog.

"I firmly believe FIFA, as a decision-making body and as an organization, is not corrupt," he wrote. "However, under the current status quo it is impossible to deny that the governing body's reputation has been sullied beyond compare and it is time for that to change."

Bin Hammam added that "something urgently needs to be done to improve and enhance the image of FIFA" in light of the accusations.

Bin Hammam was instrumental in delivering the 2022 World Cup to Qatar and has dismissed suggestions that there was any wrongdoing in connection with the bid. The British Parliament was told that two FIFA executives allegedly were paid $1.5 million to vote for Qatar.

"Much wonderful work is done by FIFA and to label the entire organization corrupt would be to tarnish the efforts of all those who operate tirelessly to bring all that is positively associated with our sport to people all over the globe," Bin Hammam wrote.

He also criticized Blatter for spending FIFA's money "arbitrarily" by donating €20 million to Interpol to tackle match-fixing and betting fraud, without consulting the executive committee.

"It is just another example of the current regime choosing to run football how it sees fit, rather than doing so in a manner that is consistent with the governing body's proper procedures," he wrote.

Though FIFA's administration has stayed neutral in the campaign, it issued a statement clarifying how the Interpol money was approved.

It said FIFA needed to make "an immediate reaction" to match-fixing problems, and finance committee chairman Julio Grondona of Argentina "was consulted with regards to this payment."

Bin Hammam is a member of the six-man finance panel led by Grondona, who is among several South American football leaders publicly backing Blatter for re-election.

Blatter, who has promised to resolve the crisis before the election, won the backing on Thursday of Oceania's 11 football nations.

"All members agreed that the current FIFA administration has had a significant impact on the development and popularity of football across the Pacific," Chung said in a statement.

Blatter, who's been FIFA president since 1998, has also been publicly supported by leaders of European authority UEFA.

The 75-year-old Swiss, who seeks a fourth and final four-year term, will travel this weekend to the Palestinian territory and Israel, accompanied by Prince Ali of Jordan. On June 1, the prince will become Asia's FIFA vice president, senior in rank to bin Hammam.

FIFA secretary general Jerome Valcke wrote on Wednesday to England's Football Association asking for a complete report plus "all documentary evidence" from David Triesman, the former leader of England's 2018 bid. The FA confirmed it was sending the dossier to FIFA.

Lawmakers were also told in a submission from The Sunday Times newspaper that Qatar paid $1.5 million to two more FIFA officials, Issa Hayatou and Jacques Anouma, for the 2022 contest. Qatar beat the United States in the final round.

Anouma is the latest of the six to deny the allegations, describing them as "false and malicious" in a statement released on Thursday by the Confederation of African Football.

Frank Lowy, the chairman of Football Federation Australia, said the allegations meant his country's bid for the 2022 hosting rights was doomed from the start.

"I could have stood on my head for 24 months and we still couldn't have got it," he said.