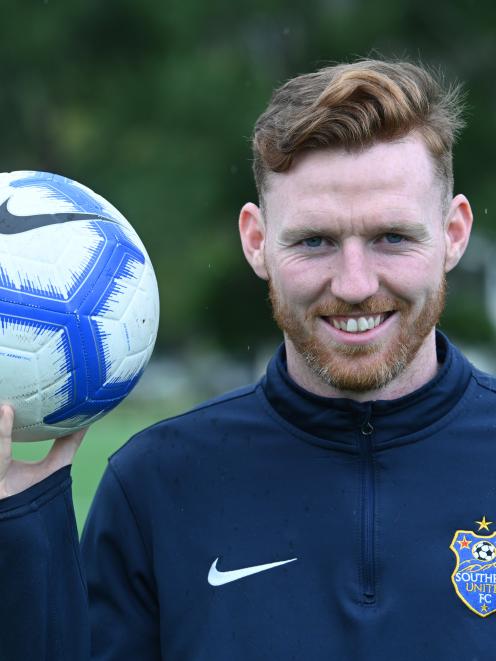 Danny Ledwith. PHOTO: ODT FILES
Danny Ledwith will clock up plenty of time on the road this summer.

The midfielder is making the trip to and from Christchurch every week to link with Canterbury United.

Keeping him company on the drive will be fellow former Southern United defender Stephen Last.

They open their season today in Christchurch, against Waitakere United.

It is a big commitment from the Irish duo, who continue to work as development officers for Football South.

But it is also what they need to do if they want to play national premiership football this year.

Southern United has not entered this year’s league, having withdrawn for the season following the impacts of Covid-19.

It may seem like it would have been tempting to leave.

A handful of his fellow Irishmen from the club headed home earlier this year, and

Garbhan Coughlan relocated permanently to Christchurch and is also turning out for Canterbury.

But neither option was considered by Ledwith.

"I know some of the boys headed home for different reasons," the 29-year-old
said.

"But I said very early days when I arrived here that I loved the country and loved the region.

"Obviously the national league is the little bit that’s missing in Dunedin at the moment, but when it was made possible we could travel and play as well as stay in the region, it makes it a lot easier.

"I’d like to get home for a holiday in the next year or two, if that’s going to be a possibility, but we’ll just have to wait and see."

Ledwith was enjoying the setup at Canterbury, although he admitted he was disappointed not to be pulling on a Southern jersey.

The team had been great at accommodating the commute, as had Football South.

The squad was a talented
one and he found much of
what had been good about Southern United was present as well.

"It’s not too dissimilar to Southern, to be honest.

"The professionalism is just as high as it was at Southern.

"The coaching is of a really good standard and some staff to help out here and there.

"We’ve got a good group of players as well.

"In that sense it hasn’t been too different to last year, so I’m excited to kick off."

A perennial top-four side, Canterbury had a disappointing season last summer.

However, Ledwith hoped it would be back in the playoff race this year.

The league is down to eight teams this year, as Tasman United is also absent.

That would give it a different look with only one South Island side.

The usual seven North Island teams were all back and Ledwith expected it to be a competitive league throughout.