Southern happy to salvage one point 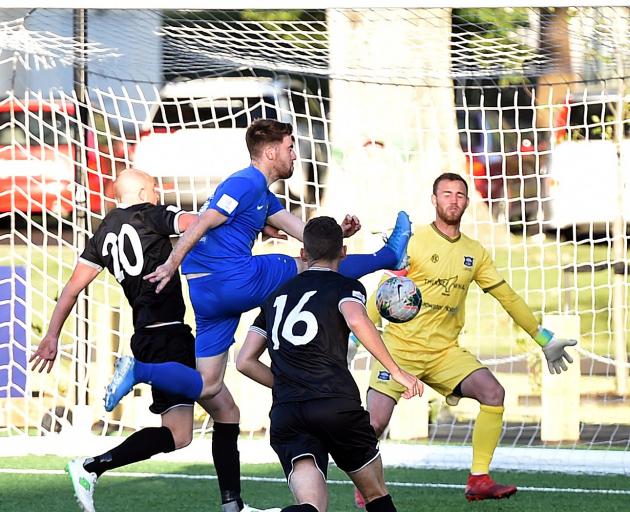 Garghan Coughlan scores for Southern United as Hawke's Bay United players (from left) Bill Robertson, Joshua Signey and Ruben Parker try to stop him. Photo: Peter McIntosh
In the end, it did well to salvage a draw.

There may be a hint of regret from Southern United that it was not a win.

But considering it was behind for most of the game, a point will suffice.

Cody Brook scored an 87th minute-equaliser to give the host a 2-2 draw against Hawke’s Bay United at Logan Park Turf in the national football premiership on Saturday.

Southern piled on the pressure in an attempt to snatch a win.

But the Hawke’s Bay defence held firm for what Southern coach Paul O’Reilly felt was a fair outcome.

"I thought it was scrappy enough," he said.

"Probably a fair result in the end; have to be happy with a point after being behind twice.

"Disappointed but great resolve to come back and get a point.

"We probably had enough chances to win the game, but I thought it got very scrappy there in the second half.

"The game got disjointed and it became a bit stretched. Both teams probably lacked a bit of quality in the final third.

"But, given the circumstances of the game, we’re happy to take the one point."

It took Hawke’s Bay just 90 seconds to open the scoring.

Ahinga Selemani found himself in space after a break down the left and crossed in for Ihaia Delaney to finish calmly.

From there, Southern sparked into action.

It attacked at a high tempo and for the next 25 minutes played the majority of the football.

Joel Stevens was lethal with the ball at his feet, as was youngster Cameron McKenzie.

The Hawke’s Bay defence was forced to scramble, its physicality at times seeming to bother the Southern players.

But despite all its intent, Southern was unable to equalise before halftime.

A goal was inevitable, though, and it came three minutes after the break.

Danny Ledwith fired in a cross from the right, allowing Garbhan Coughlan to tap in.

Hawke’s Bay answered eight minutes later, capitalising on a terrible mistake from Southern at the back.

The normally reliable Erik Panzer mis-kicked a back pass, which Selemani ran on to, beating keeper Liam Little to the ball.

He put a shot in and while Southern’s Stephen Last did well to scramble and get a foot to it, he was unable to save the goal.

O’Reilly admitted it was a big error, although he added it was football and players made mistakes every week.

It was the response as the game became more scrappy that pleased him.

McKenzie fired a rocket that hit the top right corner post in the 65th minute, the best of several chances over the next 20 minutes.

But it took until the 87th minute for substitute Brook to hit home to equalise.

After a corner went over the top, McKenzie played the ball back into the middle.

A header from Jordan Spain and a pass from Coughlan left it to land at Brook’s feet and he finished with his left boot.

Coughlan went close to adding a second a minute later, before he went down in the box to loud appeals.

Last also had an exceptional effort, heading a bullet towards keeper Ruben Parker.

But Parker saved it to ensure the points were shared.