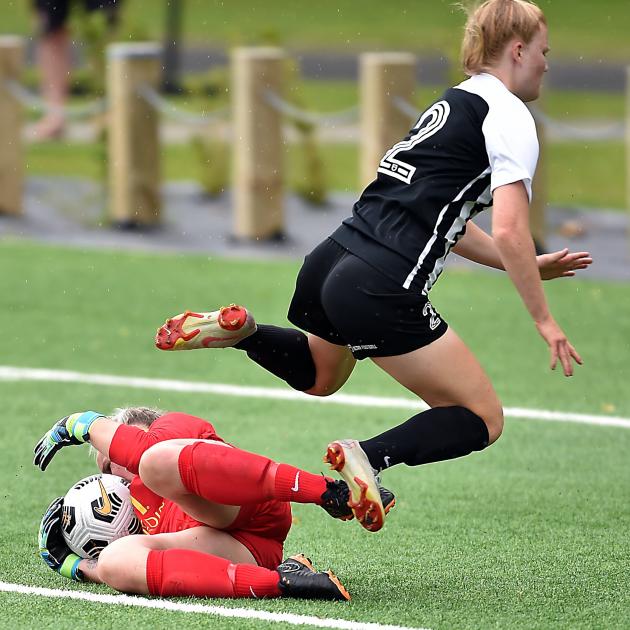 It was lucky not to lose by more — a lot more.

All the energy and resolve had drained out of the home side by the final stretch of the women’s premiership match.

Northern was able to push forward with impunity and knock in another couple to secure a comfortable win.

The visiting side dominated possession and territory, particularly in the second half.

But the final 10 minutes was a romp. Southern’s defence, which has conceded 12 goals in three games, was utterly ineffective.

Just about every push forward found another yawning gap.

Northern had more pace in its line-up and players such as Arabella Maynard and Ava Pritchard proved challenging to contain.

But Northern was also more tenacious and more hungry for the ball. Liz Savage added a lot of hustle in that department.

Northern was not exactly ruthless in front of goal, though. It hit the crossbar twice and squandered another two or three golden opportunities to add to the scoreline.

The first half was not all one way traffic, however.

Southern managed an early shot on goal and was getting some traction down both flanks.

Sam Murrell was threatening when she got the ball in space and Renee Bacon was causing some problems on the other side of the field.

Chelsea Whittaker battled hard for possession in the midfield.

But Southern was not able to string many passes together or create pressure through time on the ball in the way Northern was managing.

Striker Amy Hislop was underemployed up front. Play would break down before Southern could get her the ball.

Southern goalie Tessa Nicol was called on to make some good saves.

Maynard tested her out from about 30m but saw her shot deflected wide by the outstretched arms of the keeper.

As the game went on it was apparent Northern was controlling the tempo, controlling possession and building up pressure with a series of shots on goal.

That said, it was not until the 57th minute when the Southern’s defence finally broke.

Pritchard sprinted on to a nicely-weighted through ball and poked the shot past Nicol in a one-on-one.

Defender Aneka Mittendorff pushed forward and slipped past her opponent to spear in a cross in the 84th minute.

There was a bit of a scramble before Liz Savage booted it into the back of the net to make the score 2-0.

A combination of superior passing and some very tired defence presented Northern with a flurry of late opportunities. It converted one of them when Lily Jervis stabbed in a deflection in the 89th minute.

Southern United’s next assignment is against competition leader Auckland at Riverhills Park on November 29.