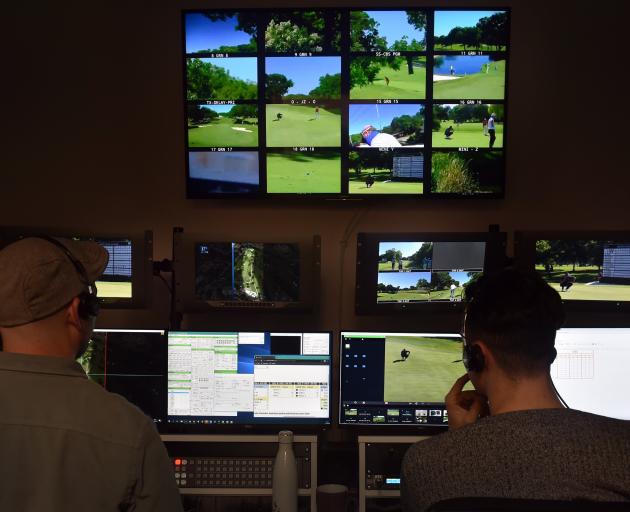 Animation Research Ltd technician Reece Witters (left) and head of augmented reality Eliott Smith check out all the action at yesterday’s first round of the Charles Schwab Challenge in Texas while sitting in the office in Dunedin.PHOTO: PETER MCINTOSH
A good walk spoiled — now a great afternoon had by all for some in Dunedin.

The PGA got back under way yesterday in the United States but for Animation Research Ltd (ARL) staff most did not have to leave the Dunedin city limits.

The first round of the Charles Schwab Challenge in Texas was played in front of no crowds in Fort Worth and ground-breaking technology from ARL technology was to the fore in the broadcasting of the event.

Before Covid-19 struck, a team went over to the United States to work on the golf production and provide all the graphics.

The team was in Florida for the first round of The Players Championship but it was canned after one round and the ARL staff hurried back to Dunedin.

They then put their thinking caps on.

With the help of some hard work and innovative thinking they fidgeted and prodded to come up with a system which could be operated in Dunedin.

Yesterday, it got its first test as television coverage of the first round began.

Instead of technicians working in a truck at the golf course, the graphics were being operated by staff back in Dunedin.

Operators had a look at more than 20 cameras and could easily put graphics on screen within a second of the clip coming through. The graphics showed such things as the flight of the ball and length to hole.

Operator Reece Witters said it was just like being on course and was completely normal.

ARL managing director Ian Taylor said it was way better for his staff.

"Instead of the guys having to do the whole tournament, finish up on the Sunday, race to the next venue, get all the stuff ready and go through a whole tournament week in week out, they can stay here in Dunedin," he said.

"Here they can finish by noon and go and play a game of golf in the afternoon. Just turn up in the office every day."

He had a crew over in the United States for back-up.

ARL had also come up with the tour cast feature for followers of the game, through the PGA website.

It showed the tracking of every shot played by every player on each round and was delivered with a very small time delay.

Taylor said this could be the future of sport. With no spectators around at the tournament yesterday because of Covid-19, the work from the Dunedin company got those watching at home as close as anyone.