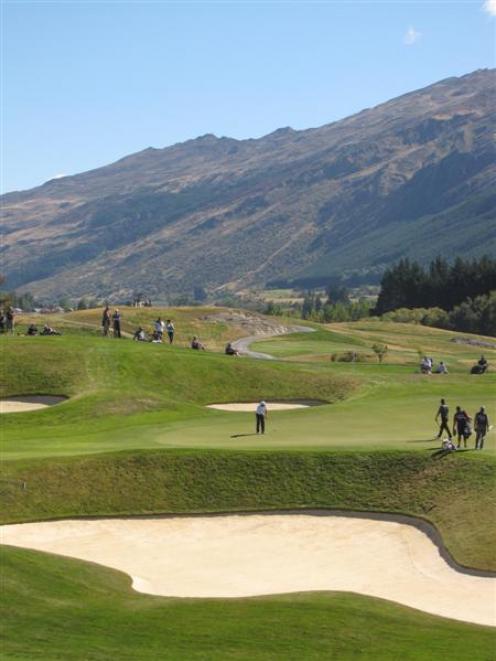 After a delay of an hour and 30 minutes because of fog, Brown began on the back nine and proceeded to make an eagle, six birdies and nine pars for a round of six-under 66, one shot clear of Australians Andrew Martin, Tim Wood and Adam Crawford.

Brown had come fresh off a six-week golf-free break. After a bogey on his fourth hole he showed the holiday had served him well, with four birdies from five holes. He then sank an eagle putt on the par 5 first. It set a tough standard for the afternoon group.

This was Brown's first tournament in New Zealand since he played in the 2007 NZ Open, also held at The Hills and the 37-year-old looked in full control.

Coming off his last hole, Brown sounded as surprised as anyone about his form.

"I hit three birdies in a row and that just kick-started everything."

Brown was the only Kiwi to register in the top 10, dominated by Australians. Wood and fellow Australian Brody Ninyette, who carded a 69, both threatened Brown's lead with late surges, but the Wellingtonian had done enough to secure day-one honours.

Brown will tee off at 12.40pm today with his closest compatriot Michael Hendry, one of a group on 69.

Of players of whom much was expected pre-tournament, top-ranked Brendan Jones finished yesterday on par, with Indonesian Open winner Nick Cullen and defending champion Mitchell Brown in a group of 15 at one over.

Returning to the course after last October's Four Nations tournament was Southland's Vaughan McCall, and it seemed his form had improved remarkably.

He began the morning session with an impressive six birdies, eight pars and a bold chip off the green to eventually finish on par.

"I feel I got the reward with my attitude and how I was thinking on my processes.

"Today is as good as I have hit it for a long time. I only missed about two shots out there." McCall admitted he still had some way to go in reaching the standard of the professionals he will be surrounded with this week.

"I played well to shoot par... but I'm still six shots away so I'm still a long way away. I've still got a long way to come as well," he said.

After the morning fog, the fine Arrowtown day helped attract about 1000 spectators.The late start meant the last playing group elected to finish their round this morning as the ball was not visible from the tee-off by about 8pm.

Today the amateur group of 64 will begin play at Jack's Point before teaming up with the 60 professionals who make the cut for play tomorrow morning.