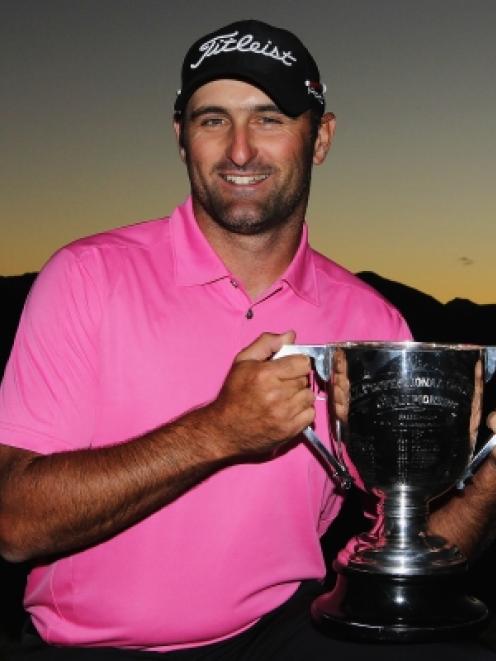 Michael Hendry, of New Zealand, poses with the trophy after winning the New Zealand PGA Pro-Am at The Hills Golf Club. Photo by Getty Images.
Michael Hendry knew the 16th hole would be tricky, but the NZ PGA Championship winner wasn't prepared for the Hollywood drama that almost cost him the prize.

It seemed like Hendry's day as the Aucklander birdied his first five holes to close in on tournament leader, Australia's Andrew Martin, who finished tied for second with New Zealander Mark Brown.

However, while Hollywood star Don Cheadle landed a hole in one on the 16th, Hendry struggled to make seven on a par 3.

"Quite literally, the only hole I had any worries about was the 16th and, obviously, that proved to be accurate," Hendry said.

"I can't really describe it, the ups and downs of the day. It's going to take a couple of days to appreciate what I've achieved here today.

Even Cheadle was riding the high of the 16th hole, which he said was one of "joy and pain".

"It was almost the story of the tournament. I get a one and Mike Hendry takes a seven. He was four shots clear of the field at that point. I walked up to him and said I would have traded that hole in one to have you stay, because that's just so painful."

Hendry finished strongly with a birdie at 17 and a par on the 18th, which meant Martin needed to birdie the last hole to force a play-off.

Martin, however, bogeyed the hole and Hendry's final round of 68 and four-round total of 272 won him the tournament by two strokes.

"Golf's never over till it's over, I wasn't prepared to celebrate."

In fact, the former New Zealand under 19 cricketer had prepared himself for a play-off and began to practise his putting near the clubhouse as Martin closed in on the 18th green.

"I won't lie. I was saying to myself coming up the the 17th 'How am I going to take this if I don't pull this off now'? And I just kind of shrugged it off and said 'Well you know what, you're going to have to work harder and be a little tougher in these situations'.

"I'm pretty pragmatic about that kind of thing. Golf is that type of game. Things like that are going to happen. If you can pick yourself up after holes like that, you're doing well.

"It's a mental game, and people talk about that all the time and it's so true.

"I can forget about that now. Job done."

It was a job the 2010 Indonesian Open winner had been waiting to finish since he turned professional.

"Winning in Indonesia was satisfying because it was my first win ... but being able to win it at home in front of my friends and family and being able to put my name on that cup.

"I definitely felt like being a New Zealander gave me an advantage today."

Hendry said the noise of the crowd and playing alongside Kiwi compatriot and good friend Mark Brown proved the difference in his mental game.

"Just hearing people saying 'come on Kiwi, you can do it' - it's fantastic.

"Maybe that had a little bit to do with the win today ,the relaxed atmosphere. Playing with a good friend. Probably took my mind off the game a little bit."

He now plans to take two weeks off before heading to China for the China Open, where he hopes to continue his form in this tournament.

He will return for next year's PGA, which has been confirmed for February 28 to March 3.