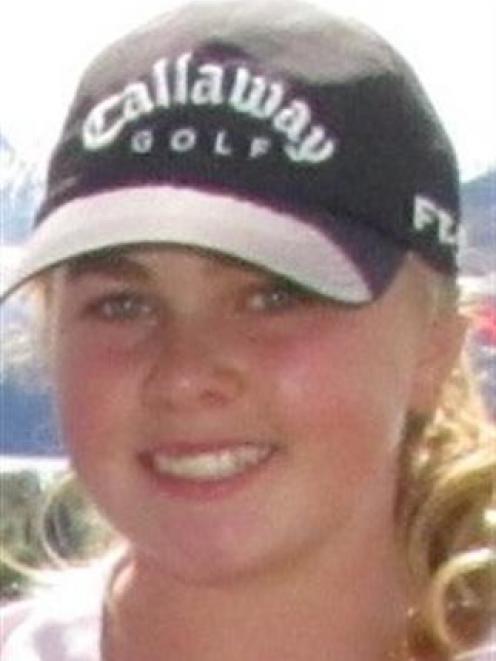 Laura Hoskin
After a bye and a rest yesterday morning, Otago romped up the Division Two leaderboard with a 5-0 drubbing of Aorangi in the afternoon to be on three points and 8.5 games with three rounds to play.

Otago started the tournament with a 2 to 3 loss to Canterbury but gained a point with a half with Hawkes Bay in the afternoon.

Otago has a tough day at the office tomorrow, meeting the favoured Auckland quintet in the morning and last year's losing finalist Waikato in the afternoon.

St Hilda's Collegiate student Laura Hoskin has made a good start in the No 1 position, posting her second win from three rounds over Aorangi's Catherine Knight yesterday.

Hoskin (15) took the early lead to be two ahead after four holes but lost the eighth hole after taking a penalty drop from deep rough.

The experienced Knight missed the 10th and 11th greens in regulation and failed to get up and down, giving Hoskin a healthy lead of three.

Hoskin increased her lead to four with a birdie on the 12th but lost two in a row and halved 16 and 17 to be two ahead with two holes to play.

Knight sank a 5m birdie putt on the 17th to stay alive but could not repeat the feat on the final green giving Hoskin the win.

Jo Hicks-Beach won the first four holes against Catherine Bell and was always in command after making a gimme birdie on the 10th to go five up.

Shani Arona (No 3) turned one up over Ginny Bolderston but fired early on the homeward nine with wins on 12, 13 and 14 to eventually win with three holes to spare.

Liz McRae had a tough match against Barbara O'Connell but turned one in front and edged a little further ahead on the back nine notching a two-up win on the final green.

Wanaka's McRae, the veteran of the team, will have a tough match against Auckland No 4 Wen Yung Keh this morning.

Win, halve or lose, McRae will have every reason to celebrate as the match will be the 100th she has played for Otago in this tournament.

Susan Greig (No 5) is a former No 1 and her experience showed when she notched her third win from as many starts in this event.

Her victim this time was Jenny Kellahan, who hung in with an excellent homeward nine after Greig turned five up.

Kellahan's spirited fightback reduced the lead to one, before Greig won the final hole to put the result beyond doubt.