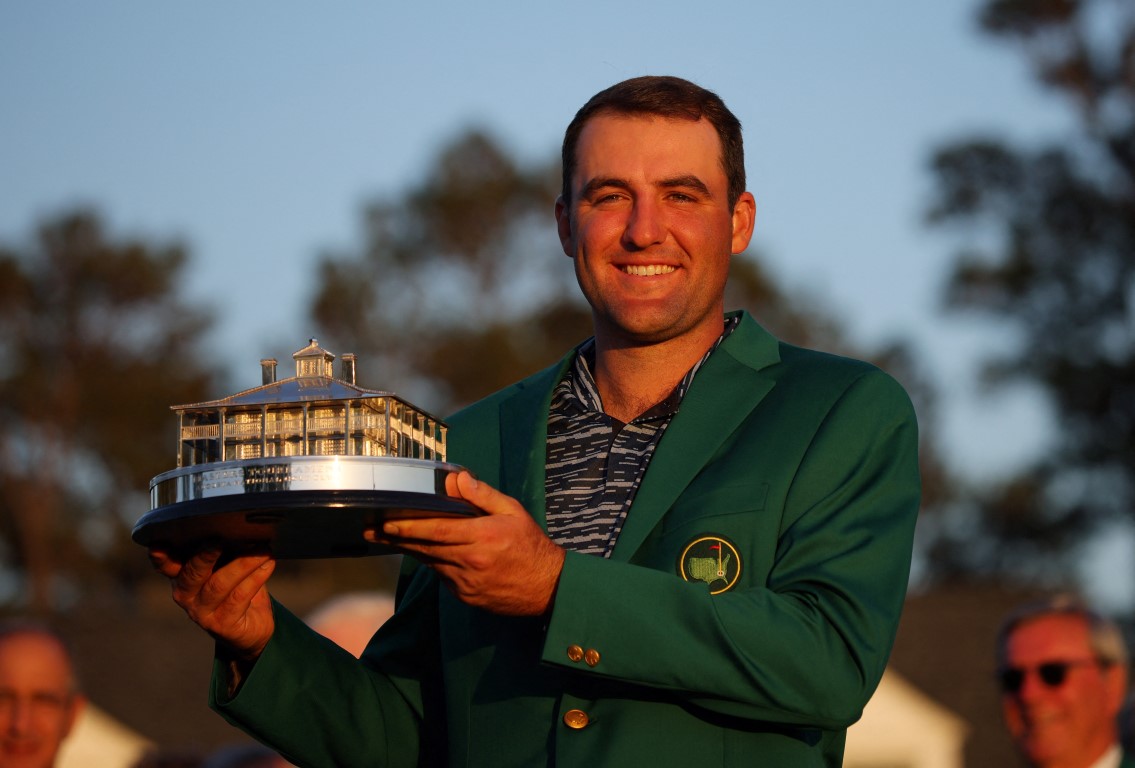 Scottie Scheffler poses in his green jacket with the trophy after winning The Masters at Augusta National Golf Club in Augusta, Georgia. Photo: Reuters
World number one Scottie Scheffler held rock steady and cruised to a three-shot victory at the Masters on Sunday while Cameron Smith's Green Jacket hopes, like so many others, disappeared in a watery grave in Amen Corner.

Scheffler started the final round at sunny Augusta National with a three-shot advantage over Australian Smith and quickly saw it chopped to one after two holes.

But the 25-year-old American did not panic, carding a one-under 71 to post a winning total of 10-under 278, three clear of Rory McIlroy, to collect his first major title.

McIlroy had the round of the day by returning an eight-under 64 as the Northern Irishman made a stirring late charge in a bid to claim the elusive Masters title that would have allowed him to complete the career Grand Slam.

The year's first major was poised for a thrilling showdown between the planet's two hottest golfers in Scheffler, winner of three of his last five PGA Tour starts, and Smith, who claimed golf's unofficial fifth major at the Players Championship in March, as they headed out in the final pairing.

That was exactly the way the final round unfolded until the par three 12th in the heart of notorious Amen Corner when Smith, trailing Scheffler by three, put his tee shot into Rae's Creek and took a triple bogey six, sending him down the leaderboard.

"It's just a really bad swing," said Smith. "Probably one of the worst swings of the week and just at the worst time of the week. Just unfortunate, but I'll grow from this and be stronger for it."

A rattled Smith never recovered, slumping to a one-over 73 to finish five back in a tie for third with Irishman Shane Lowry, who closed with 69.

Smith got his day off to a scintillating start with back-to-back birdies.

But Scheffler hit back with a spectacular chip-in birdie at the third, which Smith would bogey, restoring the world number one's three-shot cushion.

Smith slumped to a second bogey on the par three fourth and suddenly Scheffler was back in command and up by four.

As Scheffler and Smith started the back nine, an ominous warning sounded as a mighty roar rolled across Augusta National after McIlroy carded an eagle at the 13th to get to six-under for the tournament.

That left the Irishman five back of Scheffler and one behind Smith, raising pressure on the pair as they entered Amen Corner -- holes 11, 12 and 13 and perhaps the most famous stretch of golf real estate where so many Masters have been won and lost.

A long birdie putt at 11 by Smith trigger an explosion of cheers that would have been heard back home in Brisbane.

Then came the 12th where so many Green Jacket dreams have turned into nightmares, Smith's now among them after his tee shot found the water.