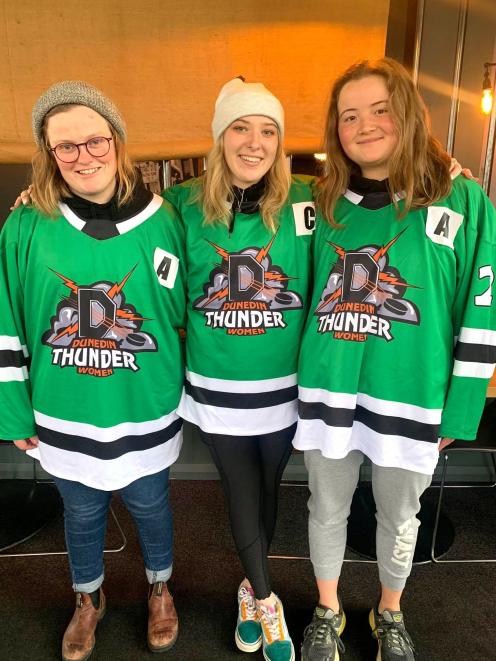 Dunedin Thunder captain Abbey Heale (centre) is flanked by assistants Anna Goulding (left) and Rina Watt. PHOTO: SUPPLIED
Women's sport is on the crest of a wave and ice hockey does not plan to be left behind.

In a promising sign for the development of the sport, the league will again have four teams: the Dunedin Thunder, the Wakatipu Wild, the Christchurch Inferno and the Auckland Steel.

The New Zealand Ice Hockey Federation has invested heavily in the league, giving women’s ice hockey players a chance to experience plenty of good competition with a view to earning selection for the Ice Fernz for international competition.

The Thunder has just confirmed its captains.

Abbey Heale will lead the squad, and her assistants are Anna Goulding and Rina Watt.

Most of the Thunder players are Dunedin secondary school pupils or University of Otago students.

No fewer than 14 players are current or former members of the New Zealand under-18 squad, indicating the team’s youth and potential.

Once, the women competed in the national league — which started in 2014 — under the Southern banner, but the split to two teams, one in Dunedin and one in Queenstown, happened in 2019.

The Canterbury team began with the rather unfortunate Devilettes nickname but changed to Inferno to create a separate identity from the Red Devils men’s team.

The Auckland Steel, based at the Paradice Avondale rink, is coached by Michelle Cox, who was the head coach of the Botany Swarm men before making the switch to the women’s league.

Six games will be held across two days at the Dunedin Ice Stadium this weekend, and again on September 4-5, before the finals in Queenstown on September 25-26.

■The Dunedin Thunder men are on the road this weekend for a doubleheader against the Botany Swarm in Auckland.

The Thunder has 12 points (3-1-1), five behind the Swarm, so likely needs to win both games to remain in playoffs contention.