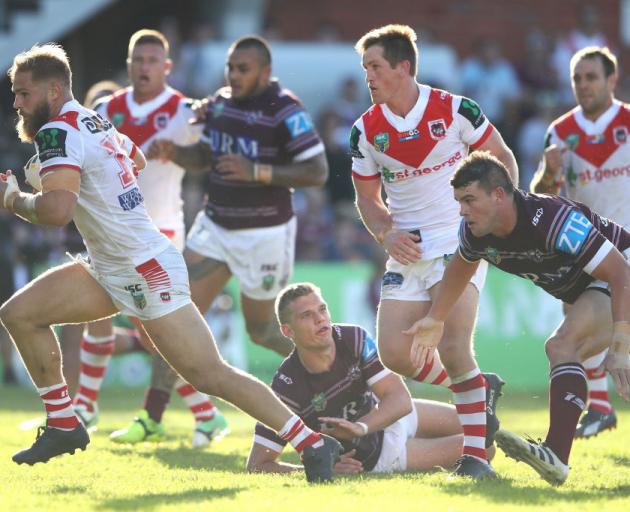 Josh McCrone set up four tries and Gareth Widdop scored 19 points as St George Illawarra flogged Manly 35-10 on Saturday.
Tipped to finish near the bottom of the ladder at the start of the season, the Dragons now sit atop the table before undefeated Melbourne's grand final rematch with Cronulla on Sunday.

However the victory may have come at a cost, with NSW State of Origin star Tyson Frizell taken from the field with a rib injury.

Manly looked nothing like the team that beat North Queensland, Canterbury and the Sydney Roosters in the past three weeks.

After conceding a controversial try in the third minute, they appeared to be playing catch-up football for the remainder of the match.

No-one made it to dummy-half for Manly as Matthew Wright played the ball on his own line, allowing Widdop to scoop the ball up from marker and score.

The video referee awarded the try, but Manly skipper Daly Cherry-Evans protested he had been denied the chance to make a tackle when Dragons winger Jason Nightingale appeared to hold him off the ball.

McCrone then helped Aitken over twice in the opening 20 minutes, the second time when he sold a dummy to the Manly defence before putting the centre into open space.

The halfback then put the game beyond doubt early in the second half when he stepped through three Manly defenders before passing to Jack de Belin to score under the posts.

Manly winger Jorge Taufua scored the 30,000th point in the club's history with his two tries, but there was to be no celebration for the Sea Eagles.
Instead, that honour belonged to Widdop.

He kicked a field goal in the dying minutes before he ended his haul by diving onto a McCrone kick to finalise the dream afternoon for the halves pairing.