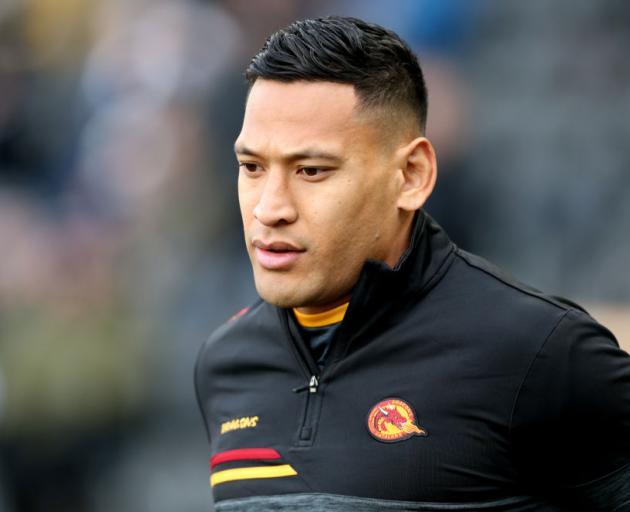 Israel Folau has been released from his French team. Photo: Getty Images
Former Wallabies fullback Israel Folau is set to resume his career in Australia after the Queensland Rugby League (QRL) said the dual code international has been registered to play for amatuer club Southport Tigers.

French rugby league side Catalans Dragons said on Monday they had agreed to release Folau from the rest of his contract after he began negotiations with them last week.

Folau, who was sacked by Rugby Australia in 2019 for a social media post deemed discriminatory by the rugby union federation, had lodged a Supreme Court injunction against the QRL after the governing body refused his registration.

"As previously stated, the QRL Board has carefully considered all aspects of the registration request, in line with its current rules and processes," QRL said in a statement on Tuesday.

"The QRL made clear from the outset that Mr Folau would be registered upon completion of the registration process, including the obtaining of a release from his previous overseas club, as per the rules of the game which apply to all players."

Folau will join up with his two brothers at the Tigers in the Gold Coast amateur competition.

After his sacking by Rugby Australia, the 32-year-old was handed a lifeline by the Catalans ahead of the 2020 season. He played in 15 out of a possible 17 matches last season and agreed to a one-year contract extension to the end of 2021.

The Dragons allowed him to miss the start of the new season in order to attend to family matters in Australia.

Folau played rugby league for Australia before switching to Australian Rules in 2011, jumping codes once again to rugby union in 2013.

A fundamentalist Christian, Folau had his Wallabies and Super Rugby deals terminated in 2019 after posting a meme that said hell awaited "drunks, homosexuals, adulterers" and others.