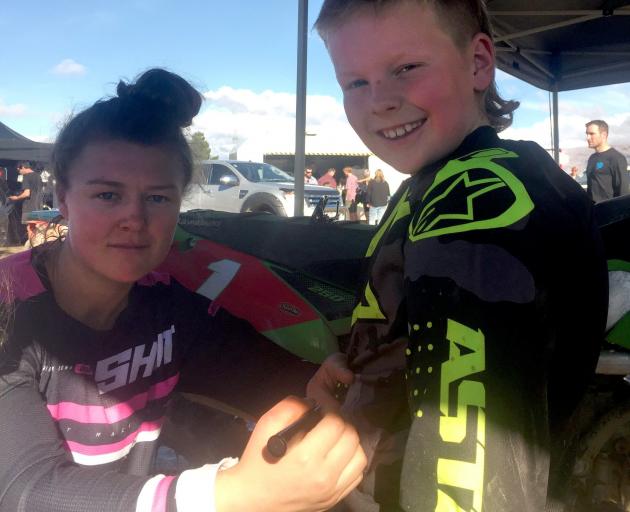 For those who could only watch the double World Women’s Motocross champion storm through from the back of the pack to win her penultimate 2021 race in Italy on MXGP’s livestream, she almost repeated the feat, in the flesh, at Cromwell.

The fall at the beginning of the race was similar — a rider in front went down on the first turn, leaving her nowhere to go but headfirst into the muddy Central Otago Motorcycle Club track. Leaping back on board her Kawasaki KX250, she picked her way through the 26-rider field from dead last, thrilling those watching.

Although she had fellow Dunedin rider Ezra Holmes firmly in her sights, he managed to hold Duncan off to win by 1.03sec.

In the first MX2 race, she had been out to beat a different bloke, coming home 5.4sec in front.

“Jack [Symon] definitely kept me on my toes there. It put me under pressure and that’s what I need to get better,” she said.

While Duncan goes up against the fastest women in the world in Europe, there was nothing like trading lap times with the local lads to keep her honest.

“[Men] are a lot more competitive. A lot more aggressive. They don’t want to get beaten by a girl — that’s the last thing they want. They don’t make it easy on me,” she said.

Duncan wrapped up the MX2 class, 13 points ahead of Invercargill’s Symon, and clean-swept the three women’s races.

She will head back to Europe with her eyes on a third consecutive crown in June, as the five-round WMX season is scheduled to begin in July.

Dunedin’s Sam Cuthbertson made a triumphant return from a year-long injury break, winning the trio of MX1 outings on his Honda CRF450.

The popular, stand-alone King of Central event attracted just over 200 entries, one of them in particular being a significant drawcard.

“Courtney definitely brings in the crowds, especially when she’s out there racing. The embankment is pretty full,” club president Blake McPhee said.