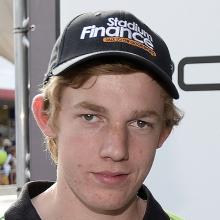 Pettigrew set a time on his last run of the day that pipped Andrew Graves (Gore, Mitsubishi EVO 3) by 0.32sec.

The club held a rallysprint this year in place of its annual rally, and the competition was intense.

Their best time from each leg was combined to give their final placing in the event.

Graves had set the fastest time of 4min 19.07sec on leg one, giving him a margin of 2.61sec over Pettigrew.

Open 2WD national champion Pettigrew, at the wheel of a car owned and also driven by David Kirk, of Gore, sealed the win on the final run of leg two with a scorching time of 4min 28.78sec, eclipsing Graves’ best by 2.93sec, giving Pettigrew the victory by 0.32sec.

Pettigrew was “over the moon” to win the sprint.

“I built confidence in the car during the day and then it all seemed to click.”

Graves was full of praise for Pettigrew’s effort.

“Ari was outstanding in a borrowed car,” Graves said.

“It was an absolutely huge day. The weather was terrible and the road very slippery in places. There would be sun and then it was teeming with rain.

"A dry run was a bonus but there weren’t many of those.”

“He did an outstanding job and enjoyed himself.”

Balclutha driver Dean Bond (EVO 6.5) was third, a shade over 7sec off the winning time, after briefly holding the lead during leg one.

Hamish Roche, of Dunedin, had class A all to himself in his Suzuki Swift GTi.

Casualties included Craig Barclay (Balclutha), who had a flywheel problem in his Ford Escort, Richie Chadwick (Dunedin), who lost ignition spark in his Toyota Corolla GT, and Isabella Magee (Dunedin), with a driveline problem in her Honda CRX.

Queenstown driver Nigel Ede was the day’s unluckiest competitor, when a gearbox problem before the first timed run forced him out of the event.