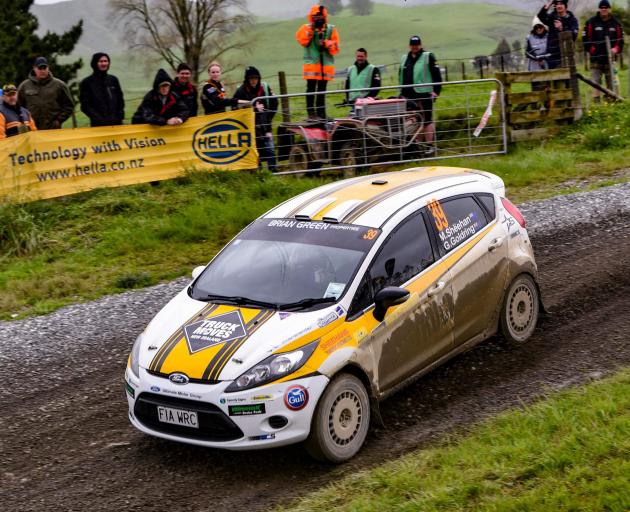 Queenstown's Mike Sheehan and co-driver Glen Goldring won the FIA Group N 2WD class, in a Ford Fiesta R2, after the sixth and final national championship round on Saturday. PHOTO: BECKY LADBROOK-FAST EXPOSURE PHOTOGRAPHY
As far as debut attempts go, Mike Sheehan nailed his first tilt at winning the FIA Group N 2WD title at the final round of the New Zealand Rally Championship (NZRC) on Saturday, at the Rally Waitomo.

The Queenstown rally driver and his Auckland-based co-driver Glenn Goldring have experienced the highs and lows of motorsport this season but reeled in the results when it counted.

"I had been slightly frustrated with my performances thus far in 2019, but the Rally of Waitomo saw us step up a gear in the second half of the event to take our driving to a new level, which we are very pleased about," Sheehan said.

After a strong start to the season in his Ford Fiesta R2, opening with a class win at Otago and a second place at Whangarei, a thumb injury slowed Sheehan's progress at the next round in Canterbury.

Then a freak mechanical failure in which his gear-stick lever snapped in half and caused a DNF at South Canterbury, the pressure piled on Sheehan to fend off his main rivals, North Canterbury siblings Robbie and Amy Stokes.

The brother and sister then had terminal engine failure in their Fiesta at the penultimate round at Coromandel, leaving Sheehan to power on to his third title in as many years.

He was twice victorious in the Mainland Rally Series' class B (1301-1600cc) in his first two full seasons of rallying before he set his sights on the NZRC for 2019.

"I'm delighted with grabbing the FIA Group N 2WD title in our first attempt, particularly because we had to string together a full championship to beat, in our opinion, the hottest young property in the NZRC right now, Robbie and Amy Stokes," Sheehan said.

Auckland-based Ben Hunt was on a mission to scorean unheard-of six NZRC rally wins in a season, when a turbo failure stopped his Subaru WRX STI in its tracks on stage five.

He and co-driver Tony Rawstorn had already sealed the driver and co-driver national titles a round earlier, bagging enough points to hand Subaru the manufacturers championship over Skoda.