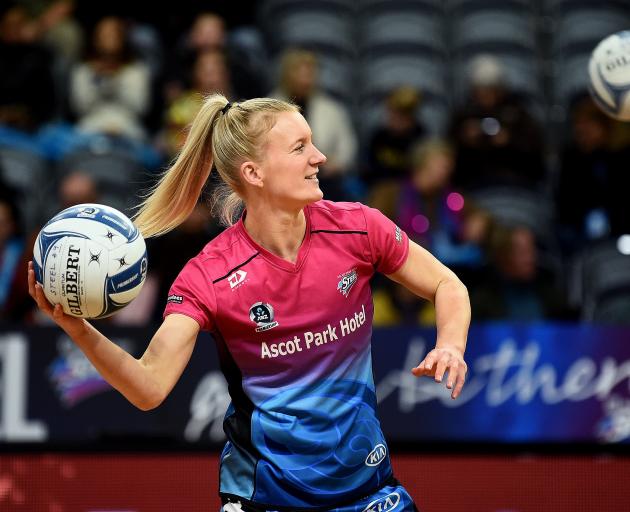 Southern Steel captain Shannon Saunders warms up ahead of her team’s round eight ANZ Premiership match against the Waikato Bay of Plenty Magic at the Edgar Centre in Dunedin last month. PHOTO: GETTY IMAGES
Shannon Saunders has been there plenty of times before.

The Southern Steel wing attack and captain has won two ANZ Premiership titles with the team.

She was there two years ago during its last foray into play-off netball.

She has won a World Cup and played in 80 tests for the Silver Ferns.

Aside from Te Huinga Reo Selby-Rickit, that is experience the majority of this Steel team does not have.

For many, tomorrow’s elimination final against the Mainland Tactix will be one of the biggest games they have played.

Even Saunders said she still gets nervous for those matches.

But those nerves normally disappeared early in the game and the team was embracing the chance to test themselves.

‘‘We just said its an exciting opportunity and it’s still a game of netball,’’ she said.

‘‘It’s still 60 minutes on the same court, no different to normal.

‘‘We’re all in it together, we’re all going to support each other as much as we can.

‘‘We’re all excited about it. We’ll probably be a bit nervous heading into the game but nerves are a good thing.’’

The Steel has defied expectations this year.

A horrid preseason had indicated this team would struggle to post wins in this year’s competition.

After a mixed start, it has now won seven of its last eight game.

Few of those have been convincing.

But this team is tough and its ability to find ways to win and protect small leads under pressure has become its trademark.

Saunders said the way it was playing together as a collective had been key to that, although admitted she would like to see the team pull away so it was not so close.

‘‘It’s just communication and making sure we’re on the same page.

‘‘Just pretty much we want to hold on to the ball, get to circle edge.

‘‘What are we doing?

‘‘How are we going to turnover ball?’’

The Steel has beaten the Tactix in two of their three meetings this year, most recently in a tight thriller in Nelson.

However, the Tactix will be a tough opponent.

In Jane Watson and Karin Burger they have arguably the best defensive pairing in the competition.

Meanwhile former Steel goal attack Te Paea Selby-Rickit is a reliable presence who knows Stadium Southland well, while Kimiora Poi is a livewire in the midcourt.

‘‘They’ve had some really great games,’’ Saunders said of the Tactix.

‘‘They play with a real high intensity and they’re real fit and fast and then their defensive end’s everywhere.

‘‘So we’re just going to be really careful with the ball and just confusing the defence.

‘‘It’s going to be a really big challenge but we’re ready for it.’’

The winner will travel to Auckland to face the Northern Mystics in next Sunday’s final.