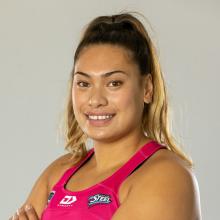 The wing defence was missing during the Steel’s thrashing from the Northern Mystics in its second game of the season.

She also left the court midway through the second quarter, the game well in control at that point, during Sunday’s loss to the Mainland Tactix.

Tonight, that theory will be tested for a third time.

Savai’inaea will miss the Steel’s match against the Waikato Bay of Plenty Magic in Rotorua with a calf injury.

She also may not be back for this weekend’s double-header, against the Magic and Central Pulse, Invercargill.

Wing defence may not be the most glamorous position, but coach Reinga Bloxham was in no doubt about Savai’inaea’s significance to the team.

"You can never underestimate the value of a really good wing defence. If you’ve got a wing defence that does their job, it usually makes the circle defenders look amazing.

"Sometimes Renee is just working away tirelessly ... to create opportunities for herself and her unit. Also the fact she just works doggedly on attack and is always available right up to that transverse line.

"She is a big cog for us and I think when she did come off, we lost a bit of our connection and our structure. Without her there, we did lose a little bit of that and we did battle."

The Steel has brought in Kate Hartley for tonight, providing cover at wing defence.

Centre Kate Heffernan also provides an option in the bib, having begun her top-level career there and having slid back in to cover on Sunday.

It will also likely open up an opportunity for Ali Wilshier, who has struggled with injury since joining the Steel last year.

She came on at centre when Savai’inaea left the court on Sunday.

The game is an important one for a Steel team in need of wins to remain in the playoff hunt.

It is in fourth place, and while there is a nine-point gap between it and the top three, it has two games in hand.

Those games will be caught up soon — tonight begins a run of three games in five days.

The table was not a concern for Bloxham, although she was aware of the significance of results at this point in the season.

The stretch of condensed games could be troublesome.

However, Bloxham said it was a case of looking at it differently.

Training had been minimal, the focus being purely on playing and recovery.

"The workload’s not too bad. We love game day, it’s just making sure we flip it all around and enjoy the challenge of these next three games.

"We’re off to Rotorua, play there and then we’re heading back to Invercargill. We can’t really get ahead of ourselves, we’ve just got to make sure we’re taking it one game at a time.

"I think the girls are actually excited to turn around so quickly after the weekend. So I think they’re really looking forward to getting out there tomorrow night and trying to redeem themselves."

The Magic is coming off a one-goal win over the table-topping Northern Mystics, who were without star shooter Grace Nweke.

While having had a disrupted season, it boasts a quality line-up with shooting duo Ameliaranne Ekenasio and Bailey Mes, alongside rugged midcourter Sam Winders and athletic defender Erena Mikaere.