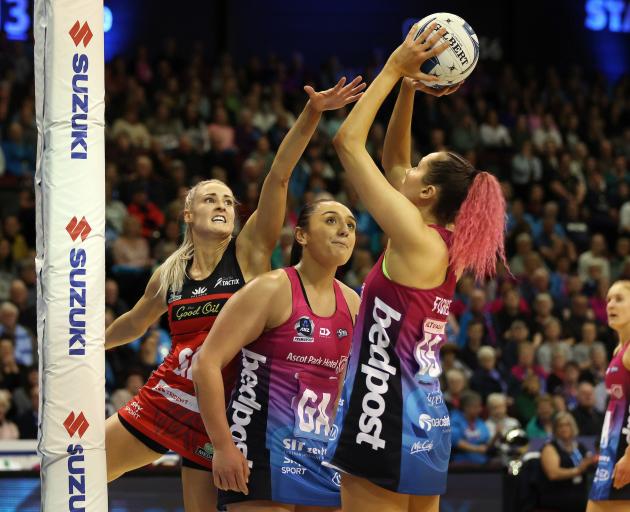 The Mainland Tactix went on an eight-goal run, winning the quarter 14-5, to set itself up for a 54-49 win in the ANZ Premiership elimination final.

The loss ended the Steel’s season, while the Tactix advances to next Sunday’s final against the Northern Mystics in Auckland.

There was plenty of resolve from the Steel to reduce the deficit back to four in the fourth quarter.

However, it left itself with too much to do.

The defensive unit of the Tactix was influential through that second quarter, the Steel unable to find its shooters.

That took it out to a 28-16 lead late in the second quarter, which proved far too much for the Steel to haul in.

When they got the ball the Steel shooters were clinical enough, finishing at 90% — George Fisher a particularly strong 39/41.

Taneisha Fifita and Kate Heffernan both came up with several brilliant defensive plays.

The second quarter was too much to come back from, an assessment Steel captain Shannon Saunders with which agreed.

‘‘The second quarter obviously killed us,’’ she said.

‘‘We just really froze up on attack and I think we played into what they wanted defensively. So that was a little bit disappointing.

‘‘But the positive was that we could come out of it and we were able to adapt and I thought opened up a lot more in the second half.

‘‘We never gave up which I think was something for such a young team. We could have gone well down into a wee pit there.

‘‘It was good to come out of it and push them to the end.

‘‘If there was another 10 minutes we could have pushed them a lot closer.’’

The lift in intensity was evident from the start and little separated the teams in the first quarter.

After the teams scored off each other’s centre passes to open the game, the Steel took a narrow lead when Renee Savai’inaea generated a turnover.

It held that for the majority of the quarter.

However, it was not quite accurate enough to extend it and, after a few miscued passes, the Tactix took the lead back late in the quarter.

At that point the Tactix gained ascendancy.

Burger began causing chaos, as the visiting side generated a string of turnovers.

The Steel pegged two back, but a Te Paea Selby-Rickit shot ensured the Tactix went to halftime ahead 29-18.

The Steel showed plenty of resolve from there.

It hit back with a mini run of its own as Heffernan and Taneisha Fifita began disrupting ball.

But the Tactix retained a 41-32 buffer heading into the final quarter.

The Steel lifted for that fourth quarter and after reducing the margin to six, a brilliant piece of work from Heffernan took the ball from Kimiora Poi.

But while the Steel never let up, it was unable to get closer than four.