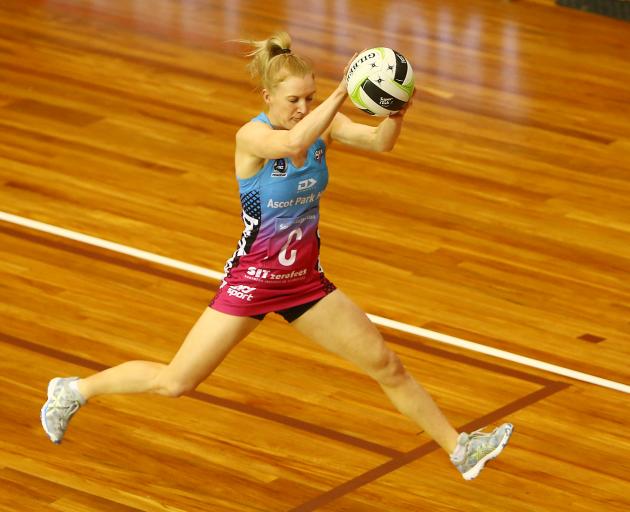 Steel midcourter Shannon Saunders. Photo: Getty Images
Not another injury — the Steel has had more than its share this season.

And the sight of form midcourter Shannon Saunders spending most of Saturday’s game against the Stars on the bench would have done little to lift the spirits of the the team’s fans.

Saunders woke up with a sore neck and did not emerge after the opening quarter.

Coach Reinga Bloxham said the complaint did not appear serious and she hoped the Silver Fern would be fit for tonight’s match against the Magic in Hamilton.

"She woke up stiff and sore and probably wasn’t herself out there," she said.

"That made it a little bit harder for her to get down the court and make those connections. But also we have four games in eight days so we were trying to make sure we look after her and hopefully she’ll be right for the Magic game."

Stars shooter Maia Wilson produced a flawless performance in the shooting circle. She landed all 39 of her attempts.

But the game was won and lost in the opening quarter.

The Steel had a horrid start and fell behind by nine goals. The game was even thereafter but the damage was irreparable.

"It was a pretty poor start and a much better finish.

"They got a couple of runs on us and defensively we were a little bit slow to adjust to what they were doing.

"They just sort of crept away from us faster than we thought. It wasn’t great."

Steel shooter Kalifa McCollin went into the game nursing an ankle complaint but shook off the injury and played a full game.

The Steel brought shooter Gemma Etheredge in as cover for McCollin and she ended up playing some minutes in the midcourt.

The Steel can ill-afford another injury to a shooter after losing Jennifer O’Connell and Georgia Heffernan for the season.

The Steel donned black armbands in the game. Team manager Dayna Kaio had a bereavement in the family.

Bloxham said the focus for tonight’s match would be on building the connections and ensuring the team made a better start.

The Mainland Tactix consolidated second place in the ANZ Premiership with a 44-35 win over the Waikato-Bay of Plenty Magic in Hamilton yesterday.