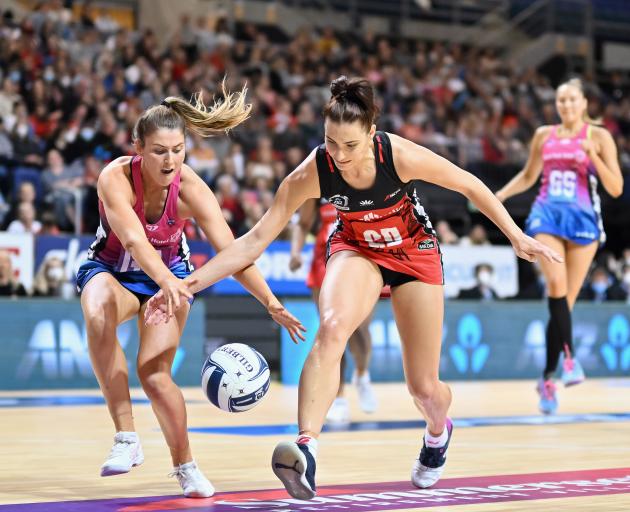 Steel goal attack Georgia Heffernan (left) and Tactix goal defence Karin Burger compete for the ball in their ANZ Premiership match in Christchurch yesterday. Steel goal shoot George Fisher looks on. PHOTO: GETTY IMAGES
Perhaps this was not so much a fourth-quarter collapse from the Southern Steel.

Little separated the Steel and the Mainland Tactix heading into the crunch moments.

But when a star needed to take over the game, it was one wearing red and black who stepped up.

Tactix centre Kimiora Poi came up with three crucial intercepts in the final quarter, giving the Tactix the ball to edge in front and keep its season alive.

It claimed a 61-56 win over the Steel in Christchurch yesterday, extending the Steel’s losing streak to three matches following its Covid-19 layoff.

It was not a collapse as had happened last Monday against the Central Pulse in Dunedin.

However, mistakes crept into the Steel game in that final quarter which proved costly.

At the other end, the Tactix was clinical with the ball it had.

Ellie Bird and Te Paea Selby-Rickit were exceptional in the home side’s shooting circle, combining for a 95% accuracy.

The Steel took four more shots than their opposition, but its lower accuracy of 82% let it down.

Steel wing defence Renee Savai’inaea left the court in the second quarter, forcing a reshuffle of the midcourt.

That left the Steel struggling to turn over ball as it had done early on, something coach Reinga Bloxham felt was key.

"I think we were forced into making some changes down that defence end," she said in her post-match television interview.

"I thought on attack we were actually really good. We were trying to hold on to the ball and we were keeping possession, which was great.

It leaves the Steel perhaps not out of contention, although very much needing wins as it heads into a congested stretch to finish the season.

The Magic looms on Wednesday night, before a double-header in Invercargill next weekend.

Tightening up the defence would be a focus for those.

"We know that probably defensively we were a bit disconnected tonight, particularly in the second half.

"First half I thought we were quite good. When you lose someone like Renee, she’s a big cog in the whole unit, it sort of throws things.

"The others that came on did their best, but we just we’re quite able to do it."

Early it had been the Steel that took the ascendancy.

Kate Heffernan and Savai’inaea were key in picking up ball, forcing the Tactix into seven first-quarter turnovers.

That helped the Steel out to a 17-13 lead, a lead which grew to six early in the second quarter, before Savai’inaea left the court.

Perhaps the Tactix attack improved too, but that point coincided with the Steel’s inability to generate turnover ball.

The Tactix edged ahead early in the third quarter and the score remained tight at 45-45 as the team’s went to the final break.

Georgia Heffernan hit a shot to give the Steel a 48-46 lead early in the fourth quarter.

But at that point the Tactix rallied.

Poi picked off three passes, which the Tactix scored off, while the Steel struggled to get the ball off the hosts.

That enabled the Tactix to open a lead, although crucially Saviour Tui hit a shot on the buzzer to claim what could be a crucial bonus point.